The graph below is from an op‐​ed I wrote on Argentina’s 15% devaluation last week, which looks like the beginning of a wider economic crisis. It shows how total government spending as a percent of GDP has doubled to an estimated 44% in the era of populist politics that began with Argentina’s massive debt default in 2002. The country has been spending beyond its means and paying for it by printing money. The government shows no signs of wanting to tame inflation or reduce spending. The bottom line is this: as the government draws down its reserves, and with few other sources of finance, we can expect people to continue to lose confidence in the currency and the economy to deteriorate further and faster.

Instead of the public defender system, how about providing poor persons who are accused of a crime with a voucher that they can use to hire their own attorney to represent them in court? Comal County, Texas will give this system a try in a few months.


From the San Antonio‐​Express News:

“Our belief is that a system of client selection can lead to improved services. Whether in fact that’s something that will occur needs to be empirically tested,” [former Indiana University School of Law dean Norman) Lefstein said. “I certainly hope that this will not be the only experiment in the United States involving client selection of counsel.”


But it will be the first. Results of the pilot program, including the costs, case outcomes and client satisfaction levels, will be tracked by the Justice Management Institute of Virginia.


“We’ve done an initial set of interviews with folks in Comal County to document how things operate,” said Elaine Borakove, institute president. “Client choice has never been tried in the United States before, so we’re very excited.”


The initiative was sparked by a 2010 Cato Institute paper calling for the use of free‐​market forces to address problems with America’s indigent defense systems, whether they’re based on court appointments or salaried public defenders.

The 2010 Cato paper mentioned is titled, “Reforming Indigent Defense,” by Stephen Schulhofer and David Friedman. In this blog post, David Friedman recalls the skepticism he received onthis idea 20 years ago from Judge Richard Posner. Another post here from Radley Balko.

Now, I know there’s been, for example, a lot of controversy surrounding the proposal to build a pipeline, the Keystone pipeline, that would carry oil from Canadian tar sands down to refineries in the Gulf. And the State Department is going through the final stages of evaluating the proposal. That’s how it’s always been done. But I do want to be clear: Allowing the Keystone pipeline to be built requires a finding that doing so would be in our nation’s interest. And our national interest will be served only if this project does not significantly exacerbate the problem of carbon pollution. The net effects of the pipeline’s impact on our climate will be absolutely critical to determining whether this project is allowed to go forward. It’s relevant.

This basically should have green‐​lighted the pipeline, because, as I pointed out in congressional testimony last year, regardless of how you figure the carbon dioxide emissions from the pipeline’s oil, the resulting climate impact will be so small as to assuredly put the president’s mind at ease.


The just‐​released Final Environmental Impact Statement from the State Department concluded about the same thing as the Draft Environmental Impacts Statement from the State Department, which is in complete agreement with my findings regarding carbon dioxide emissions from the pipeline’s oil and climate change. The net global warming impact from the pipeline oil amounts to somewhat less than 1/100th of a degree Celsius over the next 100 years.


So if the president wants to kill the Keystone XL pipeline (clearly he does, because he has had ample opportunity to approve it), he’ll have to find a reason to do so other than a climate one. Unfortunately for him, trying to kill it for other reasons would be equally ill‐​founded.

The run‐​up to Tuesday’s State of the Union seemed downright ominous for those of us opposed to rule by presidential decree. “I’ve got a pen and I’ve got a phone,” the president warned uncooperative legislators: “we’re not just going to be waiting for legislation in order to make sure that we’re providing Americans the kind of help they need.” “You have to swerve really hard to the executive powers at a time like this,” a senior administration official told the Washington Post. 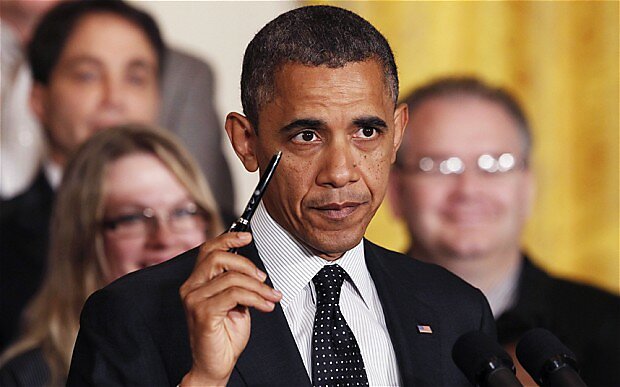 Obama would, Press Secretary Jay Carney explained, “work with Congress where he can, [but] bypass Congress where necessary,” because 2014 was going to be “A Year of Action.” (Last year’s SOTU slogan was “Let’s Get It Done,” but I guess we didn’t git ‘er done).


Yet the unilateral actions mentioned in Tuesday’s speech are mostly Clintonian smallball: new “innovation centers”; expanding SelectUSA; a Biden‐​led review of federal job training; jawboning CEOs about unemployment, etc. (though I am curious where the president’s supposed to get the authority to conjure new retirement savings accounts into existence…)


Obama also issued a veiled threat that “with or without Congress,” he’d move forward on gun control. But it’s not much of a threat if last year’s list of 23 executive actions on guns is any indication. Contra the excitable Rep. Steve Stockman (R-TX), nominating a new ATF director and “review[ing] safety standards for gun locks and gun safes” do not “an existential threat to this nation” make.


All in all, the executive action items in the 2014 SOTU weren’t nearly as menacing as the hype. ““Stroke of the pen, law of the land,” kinda… lame.

The Justice Department wants low‐​level drug criminals who were sentenced under tough laws from the days of the crack epidemic to ask the president for early release from prison.


In an unprecedented move, Deputy Attorney General James M. Cole asked defense lawyers on Thursday to help the government locate prisoners and encourage them to apply for clemency. The clemency drive is part of the Obama administration’s effort to undo a disparity that flooded the nation’s prison system and disproportionately affected black men.

“Bypassing Congress” is suddenly the White House slogan of the hour, but as Eugene Kontorovich points out at the Volokh Conspiracy, that loose term tends to confound two entirely different kinds of executive action. It’s fully consistent with our constitutional design for the president to act unilaterally in exercising what are known as inherent executive powers along with some range of statutory executive powers legitimately delegated by Congress. Since the American Revolution and indeed long before, executive clemency has been among the most widely recognized of inherent executive powers, a subject of very broad discretion. For a president, that’s some of the most solid ground he can stand on, constitutionally speaking; he gets onto thin ice when he tries to use unilateral executive action to accomplish essentially legislative goals, as by decreeing changes in labor law that Congress is unwilling to enact.

It’s baffling that over a quarter‐​century in which presidents of both parties have relentlessly sought to assert powers the Constitution never granted them they should be so meek about using the pardon powers that our constitutional system unquestionably gives them.

It’s entirely consistent to insist on applying close constitutional scrutiny when the president decrees, say, higher minimum wages at federal contractors, even as we applaud this week’s progress toward the wise and merciful use of executive clemency powers well‐​settled since the time of the Founding.

One of the great libertarian victories of the past few decades was the tax revolt of the late 1970s and early 1980s. The inflation of the 1970s caused higher property taxes and income tax bracket creep, which led to California’s Proposition 13, the Kemp‐​Roth tax cut bill, the election of Ronald Reagan in 1980, the 1981 tax cut, the deceleration of government spending, the further lowering of marginal rates in 1986—and a long period during which economic growth exceeded government growth.


This story isn’t told often in history books and popular media. Even with the boom in histories of modern conservatism, which in many instances focuses on the reaction to socialism and the welfare state, there is rarely a sense of the important arguments that free‐​market advocates were making. That’s why it’s important to have historians who understand economics and appreciate the value of limited government. One such historian is Brian Domitrovic, author of Econoclasts: The Rebels Who Sparked the Supply‐​Side Revolution and Restored American Prosperity.


In the latest issue of Cato Policy Report, the Cato Institute’s newsletter for Sponsors and friends, Domitrovic has a lead article titled “Tax Revolt! It’s Time to Learn from Past Success,” where he tells the story outlined above. If you get discouraged about the possibility of positive change, you should read it. Or read it if you just want to know more about the history of movements for limited government.


Also in the January‐​February Cato Policy Report: my editorial on Pope Francis, Nelson Mandela, and the longing for Utopia; leading scholars and policymakers on a century of central banking; and reports on NSA surveillance, jury nullification, and Cato’s recent policy studies.


Note that if you were a Cato Sponsor, you would get articles like this in your mailbox every month, along with the satisfaction of supporting the work of the Cato Institute. Become a Sponsor now!

Today the Washington Post has a story, also featured in their DC-area radio ads, about how some states are looking to change the name of the Common Core, but not the substance, because the brand has gotten too toxic. That the Post has so prominently run such a story shows just how noxious the fumes surrounding the Common Core curriculum standards have become, and it’s great that the paper is shining a light on dubious efforts to quell opposition. But within the story itself are several examples illustrating why, even as disgust over the Core grows, the average person doesn’t know how truly foul much about the Core is.

The Post certainly makes clear how some states are trying to cover the Core’s stench with perfume rather than attack its rot. Basically, states such as Arizona and Iowa are just changing the Core’s name. Speaking to the Council of Chief State School Officers, one of the two professional organizations that created the Core, likely Republican presidential candidate Mike Huckabee captured the tactic in one, succinct sentence: “Rebrand it, refocus it, but don’t retreat.”

That doesn’t sound like addressing people’s serious concerns. It sounds like, well, deception—alas, nothing new in the Common Core sales job.

Unfortunately, the Post’s story is itself guilty of Core-tilted inaccuracy, though whether knowingly or unknowingly is impossible to tell. And the Post is hardly alone among media outlets in these failings.

There’s no more crucial an example of this than the piece’s description of the Obama administration’s role in getting states to adopt the Core. Twice the article says the administration gave its “endorsement” to the Core, as if the President simply blurbed the back cover of the standards or was filmed hauling lumber in his Ford Common Core 150.

But the administration didn’t just say “Man, this Core is great!” No, it told states that if they wanted to compete for part of the $4.35-billion Race to the Top—a chunk of the “Stimulus”—they had to promise to adopt the Core. And if they wanted waivers from the almost universally disliked No Child Left Behind Act, they would have only one option other than the Core to show that their standards were “college and career ready.”

There’s a reason most states promised to adopt the Common Core before the final standards were even published: They had to for a shot at federal money!