Ever since Obamacare became law, I have been counseling states not to establish the law's health insurance "exchanges," in part because:

to create an Exchange is to create a taxpayer-funded lobbying group dedicated to fighting repeal. An Exchange’s employees would owe their power and their paychecks to this law. Naturally, they would aid the fight to preserve the law.

California was the first state both to reject my advice and to prove my point.

They claimed that health plans offered through Covered California in 2014 will cost the same or less than health insurance costs today. "The rates submitted to Covered California for the 2014 individual market," they wrote, "ranged from two percent above to 29 percent below the 2013 average premium for small employer plans in California’s most populous regions."

Unfortunately, anyone who knows anything about health insurance or Obamacare knew instantly that this claim was bogus, for three reasons. 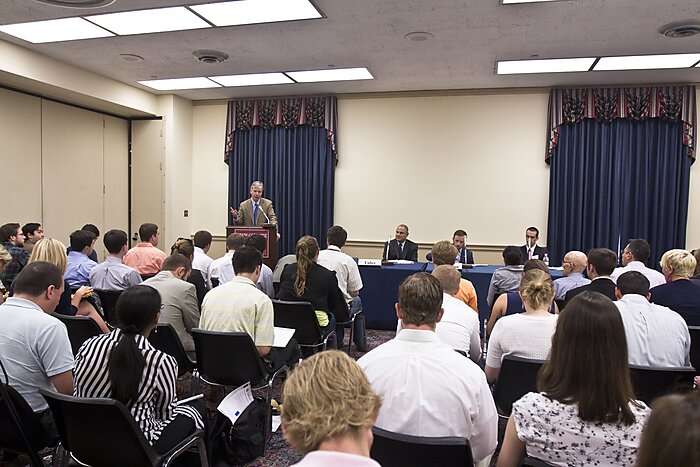 
I discussed five reasons why farm subsidies make no sense.


1. Unfair Redistribution. Farm programs take from average taxpayers and give to higher‐​income farm households, which is a reverse Robin Hood scheme. In 2011 average incomes of farm households was $87,289, or 25 percent higher than the $69,677 average of all U.S. households.


2. Economic Distortions. Farm subsidies can induce excess production, an overuse of marginal farmland, and land price inflation. Subsidies can cause less efficient planting, induce excess borrowing by farmers, and cause insufficient attention to cost control. Farm businesses have less incentive to innovate and control their costs because they know that the government will always bail them out.


3. Environmental Damage. Farm subsidies tend to draw marginal farmland into production, lands that might otherwise be used for forests or wetlands. Subsidies can also induce excess use of fertilizers and pesticides in farm production.


4. Farming Not Unique. Why is farming so coddled by the government? It’s a risky business, but not uniquely so. Industries such as high technology, newspapers, and restaurants are very risky, yet they don’t rely on government handouts. Farming faces certain risks such as adverse weather. But high‐​tech companies are vulnerable to rapid innovations by competitors, and restaurants are vulnerable to changing consumer tastes and intense competition.


Farmers are supposed to be rugged individualists, so is it strange that they don’t feel more guilt and embarrassment about sponging off taxpayers decade after decade. Instead, farm organizations intensely lobby to keep and expand their welfare handouts from the government.


5. Farming Would Thrive Without Subsidies. If farm subsidies were ended, farming would go through a transition period, which would be tough on some farmers. But farmers would adjust by changing their mix of crops, altering their land use, cutting costs, innovating with new crops and new technologies. Some farms would go bankrupt. But a stronger and more innovative agriculture industry would emerge that would be more productive and more resilient in the long run.


Consider New Zealand’s reforms in the 1980s. That country eliminated nearly all its agriculture subsidies, which created challenges for the nation’s farmers. But New Zealand farmers turned out to be great entrepreneurs, and they made impressive changes to survive and thrive in the new free market environment. Today, New Zealand farmers generally don’t want subsidies, and they argue that we would be all better off without them.

Debate on the House Agriculture Committee’s version of the next farm bill will begin in the Republican‐​controlled chamber in June. One of the most contentious issues will be spending on the Supplemental Nutrition Assistance Program (SNAP, a.k.a, food stamps). The House Ag bill would cut SNAP spending by $20.5 billion over 10 years versus the Congressional Budget Office’s baseline. That’s too much for Democrats and it might be too little for conservative Republicans.


Earlier in the week I wrote that the federal government should not administer or fund anti‐​poverty programs. Unfortunately, both Republicans and Democrats support big government so that isn’t an option. So let’s put the proposed cuts in food stamps in perspective.

The second chart shows the projected amount of spending under the House Ag bill versus the CBO’s baseline. Sum up the difference and you get the $20.5 billion over 10 years in cuts. On an annualized basis, it becomes clear that we’re hardly talking about major cuts to the food stamps program. Moreover, as the first chart shows, spending would remain near the elevated levels of recent years. 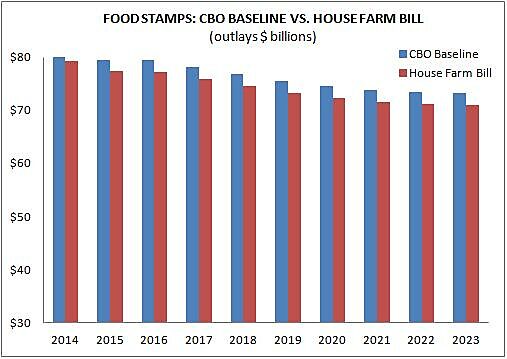 One of the more far-reaching federal rules targets people who provide “material support” for terrorists. In principle, it’s hard to disagree with such an approach: terrorism is bad, so no one should support terrorists.

However, what does “material support” mean? You can go to jail for 10 years if convicted, so it would be nice to know what is prohibited.

There is more than a little nervousness in the non-governmental organization community over the rule’s reach. Warned the Center for Constitutional Rights, the law criminalizes “activities like distribution of literature, engaging in political advocacy, participating in peace conferences, training in human rights advocacy, and donating cash and humanitarian assistance, even when this type of support is intended only to promote lawful and non-violent activities. Nonetheless, the Supreme Court recently upheld the government’s broad reading of the statute to criminalize speech in the form of coordinated political advocacy.” Could I be imprisoned if I wrote a column on a group tagged as terrorist by Washington?

Unfortunately, the Washington authorities have routinely misused the concept. In separate context, the federal government denied refugee status to a teen deemed as providing “material support” for Colombian communist insurgents who murdered his parents because he was forced at gunpoint to bury some of their victims. A Liberian woman was deemed to have provided “material support” for guerrillas who had raped her because she was forced at gunpoint to cook for them.

If the rest of us are vulnerable to extreme interpretations of the law, then lawmakers who approved the law should be subject to the same legal risks. Consider Sen. John McCain (R-Ariz.), who has been campaigning for war in Syria, just as he previously promoted war most everywhere else around the globe.

During his recent visit to Syrian rebels, he would seem to have provided “material support” to terrorists. Reports Reuters:

The big catch phrase for those fighting to keep subsidized student loan interest rates at 3.4 percent is “don’t double my rate.” That’s because the rate is set to increase from 3.4 percent to 6.8 percent on July 1. But if President Obama’s Rose Garden pep rally today is any indication, the phrase should be more like “don’t raise my rate at all.”


The POTUS attacked recently passed legislation in the House–which tracks pretty closely with his own proposal – because, he said, it doesn’t do enough to keep loan rates low. Really? The Smarter Solution for Students Act – which, by the way, is hardly all that smart–would set interest rates for subsidized loans at the 10‐​year Treasury note plus 2.5 percent. Today, that rate is 2.3 percent. Adding 2.5 to it is 4.8 percent, absolutely not a doubling of 3.4.


Of course, T‑bill rates could, and likely will, rise, but the main point is supposed to be to make student loan rates track with normal interest rates rather than have politicians set them arbitrarily. That was certainly the case over the last few years, when student loan rates didn’t plummet along with overall rates. But it seems a tracked rate isn’t really what students and colleges want: they want super‐​cheap – preferably free – loans, which makes sense (for them). Like normal people, they want money at as little cost to themselves as possible. Unfortunately, but not surprisingly, that is what many vote‐​seeking politicians want to give them, despite the powerful evidence that aid mainly lets colleges raise their prices at breakneck speeds, fuels demand for frills, and abets serious noncompletion. In other words, it likely does more harm than good.


All of this is why Washington should get out of student aid entirely. But for that to happen, regular people will have to make their catch‐​phrase, “Don’t give them loans at all.”

Jamen Shively, a former Microsoft executive, wants to create the Starbucks of marijuana.

His idea, as he explained to the Seattle Times, is to buy his own dispensaries in pot‐​friendly states such as Washington and Colorado and begin his long march toward a branded fortune.


His company is to be called Diego Pellicer – this a homage to Shively’s great‐​grandfather, who was once governor of Cebu in the Philippines.


His plan is to import from Mexico. Indeed, former president of the country Vicente Fox appeared with Shively at a Seattle news conference Thursday (video at the link).


Fox said at the news conference: “What a difference it makes to have Jamen here sitting at my side instead of Chapo Guzman.” Guzman is one of Mexico’s most notorious drug lords.

There is a problem: until the federal criminal law on marijuana is repealed, the climate is especially risky for investors in such an enterprise.


For Cato work related to the drug war, go here.

On Tuesday, the U.S. Court of Appeals for the D.C. Circuit served the Tennis Channel a crushing blow, essentially holding that government agencies cannot tell cable operators what networks should be disseminated to consumers.


The court found that the FCC had made an unforced error in ruling that Comcast had acted illegally against the Tennis Channel by refusing to distribute it as widely as Comcast’s own sports networks, Golf Channel and Versus. This was a challenge based on Section 616 of the Communications Act, which gives the FCC authority to prevent “multichannel video programming distributors” from restraining the ability of unaffiliated “video program vendors” from competing “fairly by discriminating” — a broad power that the FCC still managed to abuse here.


Initially, the Tennis Channel contracted with Comcast to distribute its content on Comcast’s less broadly distributed sports tier. It later approached Comcast with a proposal to reposition the channel onto a tier with broader distribution. Comcast backhanded this proposal, citing financial impracticability — a basic analysis of whether such a move would make sense given ratings, market demand, etc. An FCC administrative law judge, without citing contrary financial studies (or even a video replay) then corrected what he deemed to be marketplace “discrimination” and ordered Comcast to pay $375,000 to the government and make the Tennis Channel more widely available to consumers.


On appeal, the D.C. Circuit smashed that finding of unlawful discrimination. Indeed, substituting the judgment of an administrative agency for a freely agreed distribution deal for no good reason flouts basic principles of administrative and contract law. Even in this day of government overreach, it’s just not cricket!


Judge Brett Kavanaugh’s concurring opinion warrants special attention — and applause. He concluded that Section 616’s prohibition on discrimination only applies when a distributor possesses market power and that Comcast has no such advantage in the national video programming distribution market. According to Kavanaugh, applying Section 616 to a video programming distributor that lacks market power is not only outside the lines of the Communications Act, but the First Amendment as well.


That is, when Comcast distributes specific channels, it’s transmitting speech. Overruling a cable operator’s programming choices thus interferes with editorial discretion to select and transmit a protected form of speech. Courts should continue to umpire federal agencies that grant themselves the power to distort the marketplace of ideas.


For more on this case and the important First Amendment and rule of law issues it raises, see Randolph May of the Free State Foundation.