Since President Felipe Calderon took office six years ago and decided to aggressively fight Mexican drug cartels, Mexico has seen some 60,000 drug‐​war‐​related deaths. That’s “more than the number of Americans who died in Vietnam, but in a country with one third the U.S. population,” says former Mexican Foreign Minister Jorge Castañeda.


In a new Cato video released during President‐​elect Enrique Peña Nieto’s visit to Washington this week, Ted Carpenter explains why the U.S.-backed drug war has been a disaster and urges an end to prohibition. For an in‐​depth look at the issue, read Ted’s new book, The Fire Next Door: Mexico’s Drug Violence and the Danger to America.


You can read more Cato scholars’ writings on the War on Drugs here.

The Justice Department's Inspector General has just completed their most recent review of surveillance under the FISA Amendments Act of 2008, which is set to expire at the end of this year. The report, however, is classified—meaning the public is unlikely to see it before Congress votes to reauthorize the law for another five years during the lame duck session. Steven Aftergood of the Federation of American Scientists is trying to get a declassified version released—but he's probably got a long wait ahead of him.

As regular readers of the Cato blog may recall, I recently wrote about my efforts to get even earlier versions of this report out of the government, in hopes of understanding something about the National Security Agency's use of the sweeping surveillance powers granted by the FISA Amendments Act. Because it authorizes broad, programmatic interception of international communications without individualized search warrants, Congress insisted that the intelligence community produce a semi-annual report evaluating the NSA's compliance with the law's various procedures and safeguards, and highlighting potential civil liberties issues. Given the vast scale of surveillance under the FAA, it's hardly a guarantee of adequate oversight, but it's something. The ACLU had managed to get the first few such reports released, under the Freedom of Information Act, so way back in June, I filed a FOIA request of my own for the most recent reports. I asked for expedited review, arguing that since Congress is expected to extend those surveillance powers before the end of December, there was a strong public interest in getting these evaluations out as early as possible. Let me say again: I submitted this request in June.

In September—long past the statutory deadline of 20 business days—I finally heard back from the Justice Department, which said they could "neither confirm nor deny the existence" of reports that were required by federal law. Unsurprisingly, I appealed this facially ridiculous denial of my request—and to her credit, the senior FOIA officer at DOJ immediately acknowledged that this response had been inappropriate.  By mid-September, just under three months after my initial request went in, I was informed that they'd identified the reports I was looking for and forwarded them to the Office of the Director of National Intelligence (ODNI) for a declassification review, which they expected would be completed by early November. Joy! Would we actually get information about an intelligence program out of the government without a lawsuit? Maybe even in time to have a semi-informed public debate?

Well-meaning if misguided politicians often tout job creation when they promote preferential trade agreements: freer trade will mean higher exports (the benefits of imports are almost never mentioned), and more exports means more production, which means more jobs. That narrow focus is understandable, especially in times of above-acceptable unemployment, when every bill seems to need a jobs angle to sell: witness, for example, Secretary of Agriculture Tom Vilsack's verbal gymnastics in a statement yesterday, when he referred to the multi-year spending binge that is the Farm Bill as the "Food, Farm and Jobs Bill". Politicians, not being the most courageous of creatures, don't usually have the stomach/spine/etc. to make a principled stand in favor of free exchange across borders for its own sake (if you want to read more on the case for free trade, there are plenty of publications available at the Herbert A. Stiefel Center for Trade Policy Studies website, starting with our position statement at the bottom of the homepage).

Unfortunately, the extent of job creation is hard to quantify, and the case may be oversold. Edward Alden at the Council for Foreign Relations yesterday drew our attention to a recent International Trade Administration study that looks at the jobs created by exports and finds, well, that exports create fewer jobs than often is promised, and that the "job intensity" of exports is falling:

Being a thoughtful and kind person, I offered some advice last year to Barack Obama. I cited some powerful IRS data from the 1980s to demonstrate that there is not a simplistic linear relationship between tax rates and tax revenue.

This is the infamous Laffer Curve, and it's simply the common-sense recognition that you should include changes in taxable income in your calculations when trying to measure the impact of higher or lower tax rates on tax revenues.

No, it doesn't mean lower tax rates "pay for themselves" or that higher tax rates lead to less revenue. That only happens in unusual circumstances. But it does mean that lawmakers should exercise some prudence and judgment when deciding tax policy.

Moreover, even though I'm a strong believer in the importance of good tax policy, it's also important to understand that taxation is just one of many factors that determine economic performance. So lower tax rates, by themselves, are no guarantee of economic vitality, and higher tax rates don't necessarily mean the world is coming to an end.

With those caveats in mind, take a look at this table from the Congressional Budget Office's most recent Budget and Economic Outlook. Taken from page 109, it shows what will happen if the economy grows just a tiny bit less than the baseline projection. Not a recession, by any means, just a drop in the projected growth rate of just 1/10th of 1 percent.

On July 1st 2013, Bank of Canada Governor Mark Carney will assume the position of Governor of the Bank of England . Will Carney’s hat-switching be good for the UK? At present, one thing is certain; Carney has delivered to Canada the one thing that matters – money . 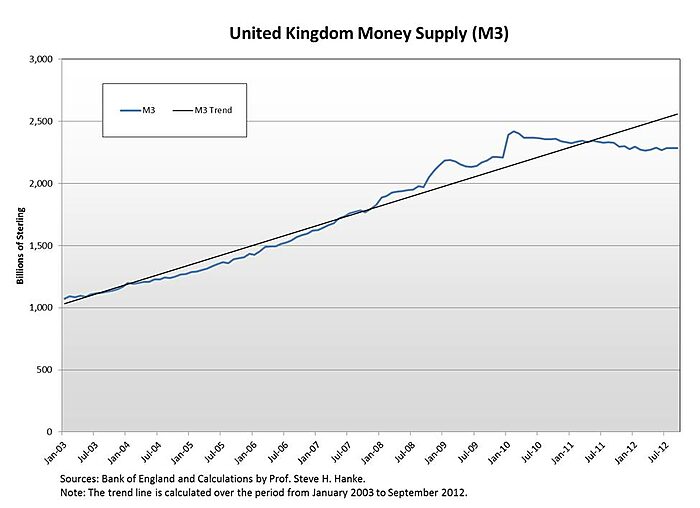 The Canadian money supply has managed to stay near trend throughout the post-Lehman era. In fact, the Canadian total money supply is currently 0.5% above trend, while the UK’s money supply is a dismal 12.1% below trend – no wonder the UK keeps flirting with recession. Although Canada’s GDP growth rates are less than stellar, they are above the average of the 34 OECD nations . Indeed, Canada’s overall economic outlook is much stronger than that of the UK .

In his new position, Carney will face the formidable challenge of turning around the UK’s slumping money supply. Regardless of Carney’s success in Canada, we will have to wait and see if he’ll be able to pull it off on the other side of the pond.

According to the New York Times, French Socialist president François Hollande demanded and received the dismissal of the editor of Le Figaro, the country’s leading conservative newspaper. If that sounds impossibly high‐​handed, consider the background, as reported in the Times:

The publisher, Serge Dassault, is a senator from [ousted President Nicolas] Sarkozy’s political party [and thus opposed to Hollande]. But Mr. Dassault also heads a major military contractor, and there was widespread speculation that [Figaro editor Étienne] Mougeotte’s ouster was meant to put the Dassault group in good stead with the new president.

For an American reader, it would be natural to turn the page with a murmur of thanks that such things don’t go on in our country. Don’t be so sure:

[Since‐​convicted Illinois Gov. Rod] Blagojevich, Harris and others are also alleged [in the federal indictment] to have withheld state assistance to the Tribune Company in connection with the sale of Wrigley Field. The statement says this was done to induce the firing of Chicago Tribune editorial board members who were critical of Blagojevich.

And in 1987, at the secret behest of the late Sen. Edward Kennedy (D-MA), Sen. Ernest Hollings (D-SC) inserted a legislative rider aimed at preventing Rupert Murdoch from simultaneously owning broadcast and newspaper properties in Boston and New York. The idea was to force him to sell the Boston Herald, the most persistent editorial voice criticizing Kennedy in his home state. Kennedy’s and Hollings’s actions drew criticism in places like the Harvard Crimson and from syndicated columnist R. Emmett Tyrrell, but no national furor developed.


One moral is that we cannot expect our First Amendment to do the whole job of protecting freedom of the press. Yes, it repels some kinds of incursions against press liberty, but it does not by its nature ward off the danger of entanglement between publishers and closely regulated industries, stadium operators, and others dependent on state sufferance. That’s one reason there’s such a difference in practice between a relatively free economy, where most lines of business do not require cultivating the good will of the state, and an economy deeply penetrated by government direction, in which nearly everyone is subject to (often implicit) pressure from the authorities. France has been unable to avoid the perils of the latter sort of economy. Can we?

The leader of Indiana State Police says he has no objection to legislative efforts to ease penalties for marijuana possession in the Hoosier State.


“It’s here, it’s going to stay, there’s an awful lot of victimization that goes with it. If it were up to me, I do believe I would legalize it and tax it, particularly in sight of the fact that several other states have now come to that part of their legal system as well,” he said.

There is a wonderful organization called Law Enforcement Against Prohibition (LEAP) that keeps growing and growing.