A key committee in the Michigan legislature has voted down a proposal to create one of ObamaCare’s health insurance “exchanges.” The Speaker of the Michigan House pronounced a state‐​run Exchange dead:

It was my hope the committee would find that a state‐​run exchange afforded us more control over the unacceptable over‐​reach by the federal government regarding the health care of Michigan citizens. After due diligence, however, it is clear that there were too many unanswered questions for the committee to feel comfortable with a state‐​run exchange and we will not have one in Michigan…


The committee apparently was not able to get the answers to key questions or receive assurances about major concerns regarding costs for Michigan taxpayers, the ability to adopt a model the federal government wouldn’t ultimately control or the ability to protect religious freedom for Michigan citizens. Because the committee could not be assured that a state exchange was the best way to protect Michigan’s citizens, it is understandable why they did not approve the bill.

Under the terms of ObamaCare, Michigan’s refusal to create an Exchange exempts all Michigan employers from the law’s employer mandate, which imposes penalties of up to $2,000 per worker per year.


And it gives the state, those employers, and those individual residents standing to file lawsuits to stop the IRS from ignoring the clear language of the law and imposing those taxes on them anyway.

Imagine your business trying to decide whether to increase or decrease spending on marketing without knowing how much your company currently spends on marketing. Worse, imagine making that decision under the false impression that your company spends nearly half as much as it actually does. Sadly, that’s the state of the education funding debate nationwide, and the media often exacerbate the problem.


For example, in a news segment on Colorado’s NBC affiliate earlier this month, the reporter acts as though the amount of money spent per child in the public schools is a matter of political opinion to be legitimately debated rather than an empirical fact:

Like any good political debate, there are two sides to every single answer. When it comes to school funding, people have been wondering how much schools get to spend per student. That answer depends on who you ask.

The first person the reporter asked was Kathleen Gebhardt, the lead attorney in Colorado’s education adequacy lawsuit, who claimed that the public schools “receive an average of $6,474 per pupil in tax dollars.” How does that compare with other states? According to Gebhardt, “We’re in the top 10 for wealth and in the bottom 10 for funding our students.”


The reporter then gets a second opinion from Ben DeGrow, senior education policy analyst at the Independence Institute, who claimed that education funding is actually “closer to $10,000 per student.”


The media segment doesn’t give DeGrow an opportunity to explain how he reached that figure, instead turning to a laughing Gebhardt who chortles, “Oh, $10,000-a-year would be unimaginable for almost anybody in Colorado! It would be a nice problem to have, but it’s not one we currently have.”


So who was telling the truth? According to the reporter, no one can really know. He concludes the segment: “Like any good political debate, much of the issue will be addressed at the polls.”


After the segment aired, DeGrow explained how he and his counterpart arrived at their figures. Gebhardt’s figure didn’t account for all sources of tax revenue. In DeGrow’s words, “It is equivalent to counting only the primary breadwinner’s earnings as household income, even though about half as much more money comes in through a side job, home business and investment earnings.”


Moreover, the reporter was asking the wrong question. He wanted to know the amount of state tax dollars that public school districts receive per pupil. The more relevant question is what is actually spent per pupil, including local and federal sources of funding. Not surprisingly, that figure is even higher. According to a report from the Colorado Department of Education, Colorado’s average per‐​pupil expenditures total $12,181, nearly double the misleading figure given by Gebhardt.


But why mislead the public about how much public schools actually cost? The penultimate paragraph provides a clue:

On Election Day, voters in 31 school districts around the state will decide whether to raise property taxes to pump an additional $1 billion into the school system in the form of bond issues for buildings or mill levy overrides for operating budgets.

And what did voters decide?

Would voters have decided as they did had they known how much money was actually spent per pupil? That’s impossible to know. But it’s also impossible to legitimately debate what the right level of public school funding should be when bureaucrats misinform the public about what public school funding currently is. A 2008 survey by Harvard University’s Program on Education Policy and Governance found that voters greatly underestimate how much public schools cost and that their funding preferences vary depending on whether they are accurately informed or not:

The average per‐​pupil spending estimate from respondents to the 2008 Education Next/​PEPG survey was $4,231, and the median response was just $2,000; but for these respondents, local average spending per pupil at the time exceeded $10,000. When told how much the local schools were spending, support for increased spending dropped by 10 percentage points, from 61 percent to a bare majority of 51 percent.

Likewise, in PEPG’s 2011 survey, only 46% of informed respondents wanted to increase funding compared with 59% of uninformed (read: misinformed) respondents.


A part of the media’s job is looking at every claim with a gimlet eye. Sadly, this is far from the only case of the media replacing their self‐​proclaimed “If your mother tells you she loves you, check it out” skepticism with “Rekab Street” credulity.

The Federal Trade Commission is on Step Two.

McAuliffe is known as “a dealmaker,” said Jennifer Duffy, who analyzes gubernatorial races for the nonpartisan Cook Political Report, and Cuccinelli “is far more ideological in a lot of ways.”


“I think [Cuccinelli] walks around with a copy of the Constitution, and McAuliffe doesn’t,” she said. 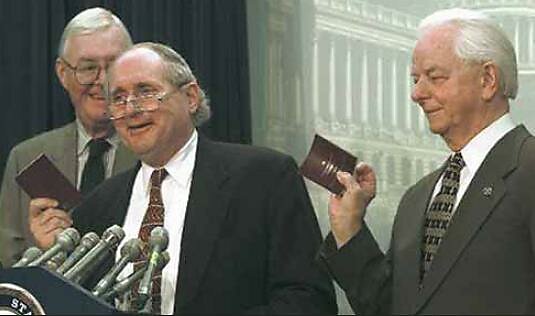 Really? The fact that the attorney general of the Commonwealth of Virginia, home of James Madison, carries a copy of the Constitution makes him an ideologue?


Cuccinelli may well be strongly ideological, for better or worse. But surely carrying a copy of the Constitution in your pocket — get yours today from the Cato Institute — is not intrinsically ideological.


For more ideologues, such as the ones below, see this article.

Here’s some ObamaCare implementation news from around the interwebs:

In an unconscious parody of everything that's wrong with the "fact-checker" movement in journalism, PolitiFact Georgia (a project of the Atlanta Journal-Constitution) has rated false my claim that operating an ObamaCare Exchange would violate Georgia law. (For some of the "fact-checker" genre's greatest worst hits, see Ben Domenech's top 10 list.)

PolitiFact's analysis is one-sided. It confuses opinions with facts. It was written with "no particular policy domain knowledge." It therefore not only reaches the wrong result -- it analyzes a claim I did not make and never would make.

PolitiFact began by saying that it was fact-checking the following claim, which I made in a November 9 opinion piece at National Review Online:

Lest anyone think I meant it would be illegal for the federal government to operate Exchanges in those states, the context and the text ("forbidding state employees") of that opinion piece make it clear I was discussing whether states should establish Exchanges. Unfortunately, the context was lost on PolitiFact readers, because PolitiFact provided neither a citation nor a link to the opinion piece it was fact-checking.

According to the New York Times, New York Gov. Andrew Cuomo and the state’s congressional delegation want the federal government to pay for $33 billion in storm damage from Hurricane Sandy plus another $9 billion for preventative measures:

I suppose one could make the argument that it wouldn’t be “fair” to make New York citizens foot the bill given that New Yorkers have helped pay for the cleanup following natural disasters in other states. But is it “fair” for the residents of other states to subsidize rebuilding efforts on coastal areas that are prone to natural disasters? Is it “fair” for Gov. Cuomo – rumored to have eyes on running for president – to use Hurricane Sandy as an opportunity to get federal taxpayers to fund infrastructure projects that he would have otherwise had to ask his constituents to pay for?


At some point the trend toward nationalization of disaster assistance needs to be reversed. And with the federal government quickly approaching another brush up against the debt ceiling, now is a good time to start. Sorry, Gov. Cuomo and Gov. Christie (the Times says New Jersey’s bill would be $30 billion), but just because the federal government can more easily borrow $72 billion than the states doesn’t mean that it should. Need money for disaster recovery? Then cut spending for lower priority items in the state budget. Still not enough money? Then provide your citizens with the details on how you plan to spend every dime that you claim is needed for recovery efforts and explain to them why a tax increase is necessary to pay for it.


Alas, it doesn’t look like the governors will have to take the politically inconvenient route. Rep. Peter King (R‑NY) told the Times that House Speaker Boehner “had committed to providing money to New York State and New Jersey without demanding spending cuts that would offset the appropriations.” That’s the same Rep. King who would be open to tax increases as part of a deal to enable the federal government to keep on overspending.