This Week in Government Failure

Over at Downsizing Government, we focused on the following issues this week:

Thank you to everyone who has helped make the Downsizing Government website a success this year. Now it’s time to get cocked, locked, and ready to rock with the new Congress.

A Happier New Year for the Beltway

The Washington region posted the highest year‐​over‐​year home price gains in the nation this fall, as real estate values slumped in nearly every other metropolitan area, a key housing report said Tuesday.


A healthy job market, particularly for high‐​salaried workers, buoyed demand and prices for housing in the D.C. area, local economists said. Home values climbed 3.7 percent in Washington in October from a year earlier, making it one of only four regions nationally to avoid a dip in prices, the Standard & Poor’s Case‐​Shiller home‐​price index said.

My colleagues David Boaz and Walter Olsen have highlighted numerous examples of how the Washington metro economy has prospered relative to the rest of the recession‐​battered country.


A map of Virginia’s unemployment rate by county produced by the Bureau of Labor Statistics is illustrative:

Unemployment rates for counties closest to the “Imperial City” are dramatically lower than the rates for those counties that are further removed. Arlington County unemployment is 3.8 percent, Alexandria City is 4.4 percent, and Fairfax County is 4.6 percent.


As David points out, the Washington region’s relative prosperity is a reflection of high pay for federal workers and “the boom in lobbying as government comes to claim and redistribute more of the wealth produced in all those other metropolitan areas.” Like an insatiable parasite, the Beltway class continues to gorge itself at the expense of the country’s productive class.


Taxpaying citizens should bear this in mind the next time they are tempted to look to Washington for “solutions” to the country’s problems.

Did America become a great industrial power in the 19th century because of its high trade barriers? This is not just an academic question. Modern‐​day critics of trade, such as Pat Buchanan and Ian Fletcher, argue that the same tariff wall that made American great more than a century ago can bring back those days of industrial glory.


I did my best to debunk this flawed historical argument in Chapter 7 of Mad about Trade, but I’m delighted to see my free‐​trade buddy Don Boudreaux of George Mason University weigh in with an article in the new issue of The Freeman.


Under the title, “Tariffs and Freedom,” Don neatly dispels a number of myths surrounding that period in American economic history.

Mexico ends 2010 with 15,000 illicit drug‐​related murders for the year—a record for the Calderon administration that began its term four years ago by declaring an all‐​out war on drug trafficking. Drug war violence skyrocketed since Calderon took office, claiming more than 30,000 lives. Though it is an unwinnable war whose consequences also include the rise of corruption and the weakening of the institutions of civil society, it is being used by drug warriors and skeptics alike to push for pet projects ranging from increased development aid to more military cooperation.


A recent example comes from the Washington Post this week. It editorialized in favor of an Obama administration plan to stem the flow of arms to Mexico, and it ran a story the same day citing the claim that 90 percent of guns in Mexico’s drug war come from the United States (though the Post also noted that the Mexican and U.S. governments refuse to release the results of their weapons traces). My colleague David Rittgers notes here that the proposed gun regulation is unlawful and here he has explained that a more realistic figure for guns of U.S. provenance is about 17 percent. In a Cato bulletin earlier this year, former Mexican foreign minister Jorge Castañeda calculated a similar figure and explained why attempts at controlling the trade in U.S. arms are a waste of time:

In fact, we only know with certainty that about 18 percent of guns come from the United States, according to Mexican and U.S. sources. The rest is surely coming from Central America, countries of the former Soviet Union, and beyond. And as countries as diverse as Brazil, Paraguay, Somalia, and Sudan attest — all countries with a higher arms per capita than Mexico — you don’t need a border with the United States to gain easy access to guns. Nevertheless, the possibilities of really limiting the sales of weapons in the United States is not imminent, to put it mildly. Moreover, asking the United States to stop arms trafficking from north to south is like asking Mexico to control its border from south to north, whether it is for drugs, people, or anything else. It’s not going to happen.

Johan Norberg on Bubbles Yet to Come 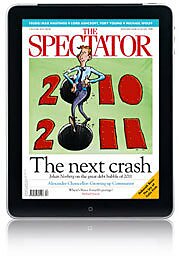 Cato senior fellow Johan Norberg, author of In Defense of Global Capitalism and Financial Fiasco, has the cover story in this week's issue of The Spectator, the eminent 182-year-old British weekly. Titled "The great debt bubble of 2011," it warns that governments are repeating their mistakes of the past decade:

At this point, it is traditional to say: thank God for those roaring economics in East Asia, India and Brazil. But how real is their remarkable growth? Look closely, and even this may be in part a result of artificial stimulus. India’s and Brazil’s growth is financed by short-term capital from abroad: money that could disappear overnight. Easy money always ends up somewhere. The last time it was in property, this time it is in emerging markets (and often in the property markets of emerging markets)....

Aside from the foreign capital inflows, China had its own stimulus package, as big as America’s. Beijing has printed yuan and pushed banks and local governments to spend like drunken Keynesians. Absurdly, China’s money supply is now larger than America’s, even though its economy is a third of the size. We can see the results of this stimulus in stock market prices and in new roads, bridges and housing complexes all over the country.

Happy New Year! And watch for more on incipient bubbles in the January-February issue of Cato Policy Report.

ATF: Laws are for the Little People

That’s the only message I can take away from the ATF proposal to require Federal Firearm License (FFL) holders to report the sale of two or more semiautomatic rifles that accept detachable magazines in states along the border with Mexico. In other words, this is gun control for the sake of Mexico.


Thing is, the proposal breaks the law. The ATF doesn’t have the authority to do this.


As David Hardy notes at Of Arms & the Law:

There are several violations of the Gun Control Act, as amended by the Firearm Owners’ Protection Act. First, 18 USC §926(b) provides “The Attorney General shall give not less than ninety days public notice, and shall afford interested parties opportunity for hearing, before prescribing such rules and regulations.” This is stricter than the Admin Procedure Act’s general provision for a “reasonable” comment period, and it has no emergency exceptions. ATFE is only giving 30 days’ notice.


Second, the FOPA amendments were intended to cut off future requirements of direct reporting — I say future because the existing regs (including reporting of multiple handgun sales were grandfathered in, but limited to those specific requirements. Thus far and no farther.

The ATF’s action provokes a court contest over the limits of the agency’s powers, which are clearly being exceeded. The litigation will provide another opportunity for Hardy’s excellent article about the legislative history of the Firearms Owners’ Protection Act to get cited in federal court.


All of this is unnecessary and lawless. There is a legitimate way for allowing the ATF to take this action: amend the law. Instead the Executive is ruling by regulatory fiat, damaging and degrading the rule of law. Unfortunately, there’s a lot of that going around these days.

The Real Problem with Those Non‐​Death Panels

Rich Lowry has the right take on the Obama administration’s decision to have Medicare cover end‐​of‐​life counseling despite Congress’ rejection of the idea.