Gallup just released a poll showing that 46 percent of Americans view the federal government as an immediate threat to the rights and freedoms of ordinary Americans. My first reaction was to wonder why the number was so low. After all, we have a political elite that wants to do everything from control our health care to monitor our financial transactions.

But a secondary set of numbers is even more remarkable. As seen in this chart, both Republicans and Democrats tend to view the federal government as a threat mostly when the White House is controlled by the other party. 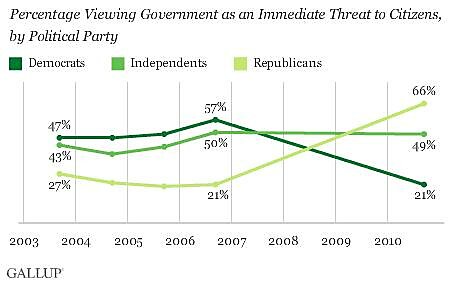 This complacency is very unfortunate. Republicans presumably want to limit government control over the economy, yet it was the Bush Administration that put in place policies such as Sarbanes-Oxley, the banana-republic TARP bailout, the corrupt farm bills, and the pork-filled transportation bills. Democrats, meanwhile, presumably want to protect our civil liberties, yet the Obama Administration has left in place virtually all of the Bush policies that the left was upset about just two years ago. There has been no effort to undo the more troublesome provisions of the PATRIOT Act. And shouldn't honest liberals be upset that the Obama Administration is going to such lengths to defend the military's don't-ask-don't-tell policy?

The lesson to be learned is that there is an unfortunate tendency for politicians to misbehave when they get control of the machinery of government. Lord Acton warned that "Power corrupts and absolute power corrupts absolutely." It's almost as if Republicans and Democrats do their best every day to confirm this statement.


The Army will shed 7,000 troops; the Royal Navy and Royal Air Force will each lose 5,000 personnel; the total workforce in the Ministry of Defence, including civilians, will contract by 42,000. The Navy’s destroyer fleet will shrink from 23 to 19. Two aircraft carriers — already under construction — will be completed, but one of the two will be either mothballed or sold within a few years. Whether the one remaining flattop in the British fleet will actually deploy with an operational fixed‐​wing aircraft is an open question. They’ve decided to jettison their Harriers; a technological marvel when it was first introduced, it has a limited range and a poor safety record. In its place, the Brits still intend to purchase Joint Strike Fighters, but not the short take‐​off and vertical landing (STOVL) version.


And right on cue, Max Boot argues in today’s Wall Street Journal, following the Heritage Foundation’s James Carafano’s example, that fiscal conservatives should not use these cuts as an example of how to reign in deficits. According to Boot and Carafano, military spending is off‐​limits. Period.


But as I note at The Skeptics, most Americans do not buy into this argument:

In Boot’s telling, Cameron’s decision inevitably places a heavier burden on the shoulders of American taxpayers and American troops.


But why should Americans perform a function for other governments that they are obligated by tradition, law and reason to perform for themselves? Defense is, as Boot notes, “one of the core responsibilities of government.” I would go one better: defense is one of the only legitimate responsibilities for government. So why does Max Boot think that Americans should simply resign themselves to take on this burden, doing for others what they should do for themselves?


I suspect that he fears that most Americans are not comfortable with the role that he and his neoconservative allies have preached for nearly two decades, hence his preemptive shot across the bow of the incoming congressional class that will have been elected on a platform of reducing the burden of government. True, the public is easily swayed, and not inclined to vote on foreign policy matters, in general, but as I noted here on Monday, it seems unlikely that the same Tea Partiers who want the U.S. government to do less in the United States are anxious to do more everywhere else. And, indeed, such sentiments are not confined to conservatives and constitutionalists who are keenly aware of government’s inherent limitations. Recent surveys by the Chicago Council of on Global Affairs (.pdf) and the Pew Research Center (here) definitively demonstrate that the public writ large is anxious to shed the role of global policeman.

In July, I blogged about the case of Minnesota farmers who were facing criminal sanctions for engaging in interstate trade. Now I am happy to report that the city of Lake Elmo has torn down its onerous and unconstitutional trade barriers:

The change was made in response to a federal judge’s opinion in August that Lake Elmo’s protectionist law likely violated the U.S. Constitution because it discriminated against interstate commerce. Magistrate Judge Franklin L. Noel stated that the law “squelche[d] competition … altogether, leaving no room for investment from outside,” and would likely have “obliterate[ed] … the Lake Elmo markets in pumpkins and Christmas trees.… In fact, Plaintiffs have shown that the markets will be wiped out.”

Congrats to our friends at the Institute for Justice who spearheaded this case! You can read more here. And you can find Judge Noel’s opinion here.


Hat tip to Baylen Linnekin at Crispy on the Outside.

Foreign aid, as many (including myself) have argued, is a very bad idea. Aside from encouraging corruption and helping to keep nasty dictators in power, it is a major disincentive to necessary political and economic reforms.


Considering how little evidence the advocates of further foreign aid have to support their case and spending cuts across the Atlantic, you would have thought that aid budgets in rich countries would be among the first to be cut. Not so in Great Britain.


The Conservative‐​Liberal coalition’s spending cuts have been hailed as the most dramatic since WWII. For example, the island nation will lose its aircraft carrier, its famous Harrier jump jet fleet and thousands of jobs in the military. The defense budget will shrink by 7.5 percent, while other departments will be cut by 19 percent on average.


The only two departments that will not see any cuts are the socialist National Health Service (a bottomless money pit) and, you have guessed it, foreign aid, which will see an actual increase by an astonishing 37 percent.


Many will remember the Blair/​Brown era for getting the UK involved in the Iraq War and bringing the country to the brink of bankruptcy. They should also remember it as an era that made support for foreign aid a badge of good citizenry — irrespective of common sense and all evidence to the contrary.

He said he was frustrated that “the Heritage and Cato misinformation campaign has obviously gained traction.” The two Washington, D.C., think tanks have produced widely discussed reports indicating that federal workers are paid too much. A “pretty prolonged misinformation campaign over the last six month leading up to this,” he said, “has worked.”

It’s not surprising that Berry – an individual who has spent his entire career working in government – doesn’t appreciate the fact that regular Americans aren’t enthusiastic about funding generous pay and benefits for federal workers.


While federal workers have received raises in recent years, millions of private sector employees have lost their jobs or have had to take pay and benefit cuts. Joe and Jane Lunchbucket might have less money for their family, but they still have to cough up money to pay for federal raises. If Berry is steamed, many of the nation’s taxpayers are getting burnt to a crisp, as the poll suggests.


An article at Gov​ern​mentEx​ec​u​tive​.com underscores why Americans think the federal workforce is privileged. Berry’s OPM is “butting heads” with federal worker unions over the ridiculously bureaucratic process of firing employees. Although the article should be read in its entirety to appreciate the eye‐​glazing details, the fight boils down to OPM’s ability to remove workers who provide false information on official federal documents.


See this Cato essay for more on federal employee pay.

The next G20 Summit, to be held November 11 – 12 in South Korea, is right around the corner. For free traders, the summit has taken on added meaning because of the promise President Obama made during the most recent G20 Summit held last June in Toronto to advance the U.S.-Korea free trade agreement (FTA):

The last time I was in Korea, I said that I would be committed to moving [the FTA] forward. And today I indicated to President Lee that it is time that our United States Trade Representative work very closely with his counterpart from the ROK to make sure that we set a path, a road, so that I can present this FTA to Congress…. I want to make sure that everything is lined up properly by the time that I visit Korea in November. And then in the few months that follow that, I intend to present it to Congress. It is the right thing to do for our country.


A preview of Doug’s analysis also was published yesterday in the Daily Caller, under the title “South Korea Free Trade Agreement Key to Prosperity and Security.”

The edu‐​documentary Waiting for ‘Superman’ continues to generate lots of noise about fixing American education. Unfortunately, like the film itself, most of the noisemakers ultimately ignore reality: The only way to make educators truly put children first is to require that they satisfy parents — the customers — to get their money. And that can mean only one thing: transforming our education system into one in which parents control education funding and educators have to earn their business.


You would think that would be clear to members of the U.S. Chamber of Commerce. Think again: In a new report, the Chamber demonstrates that what’s really needed is not a visit from Superman, but for Realityman to give it a superpowered kick to the rear so that it will demand universal school choice, not the milquetoast tweaks of the government monopoly it meekly champions.


What follows are just a few examples of where the Realityman Signal shines brightly in the report — where the Chamber clearly sees the diabolical work of government monopoly, but ultimately fails to identify the culprit — calling out for our hero to save the Chamber.


First, the paper notes that “successful businesses use well‐​documented management and leadership practices that result in lean, accountable, flexible, high‐​achieving organizations.” Meanwhile, “these practices are often absent in school management. State [sic] and districts are not held accountable for their academic outcomes relative to their expenditures.…”


No kidding: Businesses have to become ever‐​more efficient and effective or they’ll lose customers to better, cheaper competitors. Public schools, in contrast, have no real competition and get paid no matter what.


Next, if you aren’t happy with the state of your schools, the Chamber advises getting “tough with candidates and elected officials.… Call candidates, conduct town hall forums and invite the press, write op‐​eds, and call your local newspaper reporters who work on education issues.”


Now, is this how most businesses work? If a firm isn’t happy with a supplier, does it call its congressman, hold fora, pen op‐​eds, badger reporters, all in the hope of eventually persuading the supplier to change? Of course not: If the supplier doesn’t improve, the firm just finds a new one and moves on!


Finally, the Chamber laments that “other industries are changing, adapting, and harnessing the power of new technologies, but our education system resists change.”


There’s a simple explanation for this: Public schooling isn’t an “industry.” WordNet defines “industry” as “the organized action of making of goods and services for sale [italics added].” But public schools don’t sell anything. They simply take, and because they don’t have to earn any business they have little incentive to adapt new technologies.


Surely most businessmen recognize the forces that push them to do their best. Why can’t they see the desperate need for the same forces in education?