Travel after the Fall of the Iron Curtain

In the sumer of 1992, I lived and studied in Prague. I was keen on seeing life in Eastern Europe after the end of Soviet domination.


It was invigorating to think that my local law professor headed over the Vltava River in the afternoons to work on the new constitution in the Prague Castle. It was fascinating to learn of the “lustration” process by which participants in Soviet‐​era wrongs were penalized but not ostracized. Out of habit, no Czechs ever talked on the subway. Americans did.


There were other reminders of the old order. My overnight train to Katowice, Poland, from which I planned a connection to Krakow, stopped in the middle of nowhere. In the pitch black night, the sound of border guards throwing open train compartments and making demands in a foreign tongue brought forth fearsome movie‐​memories of life under totalitarianism.


They pulled a young man from my compartment and took him off the train. I don’t remember if it was a Central or South American passport, but it was one that doesn’t afford its bearer the luxury of easy international travel that Americans enjoy.


I honestly don’t remember if he was allowed back on the train. I’m just glad that era is over.

Duncan’s Invitation Just the Start of the Problem

So U.S. Secretary of Education Arne Duncan invited every Education Department employee to attend Rev. Al Sharpton’s Glenn Beck counter‐​rally. As David Boaz explained in the Examiner, it was a “highly inappropriate” thing to do, pushing people who are supposed to serve all Americans to support one side of a “political debate.” But that’s just the most obvious problem with Duncan’s weekend doings.


Perhaps just as troubling as his rally‐​prodding is that Duncan declared education “the civil rights issue of our generation” at Sharpton’s event. This only about a year after helping to kill an education program widely supported by many of the people he and Sharpton insist they want to empower. I’m talking, of course, about Washington, DC’s, Opportunity Scholarship Program, a voucher program that was proven effective. But the heck with success — Duncan and President Obama let the union‐​hated program die.


The cause for concern, though, doesn’t end there. According to the Examiner, an Education Department spokeswoman tried to gloss over the boss’s out‐​of‐​bounds play by suggesting that Sharpton’s rally was but a mere “back‐​to‐​school event.” Sound familiar?


That’s right! As I just blogged about, last year the Obama administration scared parents and taxpayers across the country by sending politically charged material to all public schools to prepare them for the president’s planned address to the nation’s children. Only after it took serious heat for that did the administration have the most alarming material changed. And then what did it do? Declared that the address would obviously be but a simple back‐​to‐​school speech, and tried to make everyone who knew what had actually transpired seem like a partisan attack dog.


As long as politicians run education, education will be hopelessly politicized. Unfortunately, that’s the simple back‐​to‐​school lesson for today.

Nikki Haley promises to be a star governor if–most likely when–she’s elected this fall by South Carolina voters. Word is she’s a committed fiscal conservative, and her background is steeped in a successful family business, not large corporations, so she should have an intuitive grasp of what makes our economy grow.


And Haley has a long, solid record of supporting school choice through education tax credits in South Carolina. As recently as August 19th, Haley was reported as saying, “like Sanford, she would veto a bill to expand public education options unless it included help with private tuition. She agreed with Sanford that it must be all or nothing, saying otherwise the Legislature won’t return to the debate.”


But Haley has recently put out some concerning and confusing statements on school choice. “Haley said approving private‐​school choice, which would provide tax credits or vouchers to pay private‐​school tuition, was not a priority. ‘That is not my focus; my focus is the school funding formula,’ Haley said.”


Changing the funding formula is all well and good. It might save some money. But it will NOT improve education in South Carolina. Education tax credits will improve performance and save much more than any public school reform. School choice should be Haley’s only education issue.


Why is she backing away all of a sudden? Sure, the primary is over, but Haley is leading comfortably in the polls. Education tax credits pull down serious majority support across nearly every single demographic in South Carolina. White voters, black voters, old and young, Republicans and even Democrats. This is a great issue. And backtracking on a signature issue could tarnish her fresh, reformer image.


Most important, school choice is the right policy. Haley always seemed to have a deep understanding that only an education tax credit program can substantively improve education in South Carolina.


Senator Jim DeMint has a great short video plug for school choice out … let’s hope Haley takes a look at this, remembers what reform really matters, and does the right thing in office.

As many of you may know, Australia had a federal election on August 21 that yielded an at‐​time‐​of‐​blogging inconclusive result. As a consequence, the Liberal‐​National coalition (currently in opposition) and the Australian Labor Party are both wooing the Green and Independent members in the hope of securing their support. A Canberra‐​based friend sent me a link to an article in today’s (or, strictly speaking given the time difference, yesterday’s) Australian about the trade‐​related aspects of the current negotiations to form a minority government.


I’ll admit, the story had me worried. I’ve bragged before about Australia’s bipartisan political consensus on free trade, and it looked as though that was under threat. According to the article, Labor — the party responsible for much of the unilateral trade liberalization undertaken in the 1980s — was considering “re‐​erecting tariff walls”:

Yes, modern Labor has degenerated to the point where the Treasurer allows the prospect of protectionist horse‐​trading to be part of the equation for forming Australia’s next government. And so Australia’s political deadlock threatens to encourage the rise of a new industry protectionism driven by the anti‐​capitalist Greens in cahoots with left‐​wing trade unions and rural populism…

A few hours later, a new, happier story was filed on the Australian’s website:

…Ms Gillard used her press club speech to offer continuity and certainty, but made clear she would not seek [Independent] Mr Katter’s vote by pandering to his passionate rejection of free trade, which he believes has ravaged sectors such as the sugar industry in his north Queensland seat of Kennedy.


“You’re talking to the leader of the political party that literally went to hell and back to modernise the Australian economy, including reducing tariff barriers,” Ms Gillard said.


“We would not have the modern resilient Australian economy we have now if Labor had not built it.

I’ll ignore that last preposterous statement about a political party building an economy, and instead focus on the main thrust of Ms. Gillard’s comments, which should come as a relief to free‐​traders everywhere, especially in Australia.

Three of the world’s largest companies involved in wireless telecommunications—Nokia, AT&T, and Verizon—this week asked the Obama administration to further loosen the U.S. embargo against Cuba. According to a Bloomberg News story this morning:

Nokia, the world’s biggest mobile‐​phone maker, is urging the U.S. to ease its 47‐​year‐​old trade embargo so it can sell handsets to Cuba. AT&T and Verizon, the largest U.S. wireless providers, urged regulators to make it easier for U.S. companies to directly connect calls to and from Cuba.

The almost half‐​century‐​old embargo no longer serves any legitimate national security purpose, as I’ve argued before. The remaining restrictions on providing wireless communication services only demonstrate how the embargo actually undermines our stated goal of bringing more freedom to the long‐​suffering people of Cuba.


To President Obama’s credit, he has done more than most presidents to ease the embargo, including modest steps such as easing travel restrictions for Cuban‐​Americans and authorizing telecommunications firms to offer limited service in Cuba. In practice, however, President Obama’s efforts have had little effect, and they have not gone far enough.


If the basis of current U.S. policy toward Cuba is democratic empowerment of its people, then removing telecommunications restrictions would be a logical and healthy next step. According to the Bloomberg story, Cuba still has the lowest mobile‐​phone penetration rate in Latin America. What better way to empower nearly eleven and a half million people than by easing restrictions on their communications with free residents of the democratic United States?


President Obama himself argued in a White House statement in April 2009 that two of the best ways to promote Cuban democratization were by “facilitating greater contact between separated family members in the United States and Cuba” and “increasing the flow of … information to the Cuban people.”


Here is an opportunity to translate those sound words into action.

The Likelihood of Repealing ObamaCare

The political science blog Rule 22 has a post discussing the likelihood of repealing at least some part of ObamaCare. Author Jordan Ragusa finds:

Ragusa is predicting only that the odds are better than 50–50 that Congress will repeal some part of the law, such as the expanded 1099 reporting, which House Democrats have already moved to eliminate because small businesses find it so onerous. He is not laying odds on whether Congress will repeal the entire law or its most important and unpopular provisions (i.e., ObamaCare’s individual mandate). 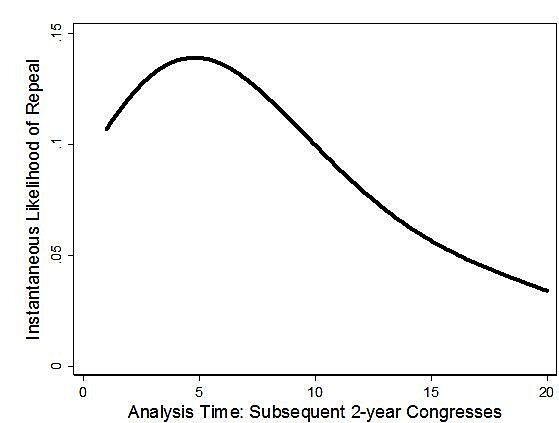 Note that this graph shows the instantaneous probability of repeal. The cumulative probability is the area under the curve, and increases monotonically over time. Thus the probability that Congress will repeal some part of ObamaCare by 2020 is more than 13 percent.

the newly enacted law will be most “at risk” not in the next Congress, but a decade from now. So sit tight.

Also noteworthy is that Ragusa presents only the probability of legislative repeal. The prospect that the courts may invalidate all or part of the law increases the probability that some day, ObamaCare will no longer be on the books.

Colombia’s new president Juan Manuel Santos came out last week in support of a debate on drug legalization, endorsing the call made a few weeks ago by his Mexican counterpart, Felipe Calderón.


Santos even said that if Californian voters passed a ballot initiative this November to legalize marijuana, he would team up with the presidents of Mexico and Peru “to work out how we are going to react and what is going to happen after this referendum.”


This seems to confirm the reports of the Mexican newspaper El Universal which claimed that Calderón’s turn around in his willingness to discuss drug legalization came after meeting with then president‐​elect Santos, who told him that Mexico should lead a debate on drug legalization. A week ago, Costa Rican president Laura Chinchilla said she was open for a debate on legalizing marijuana [in Spanish], even though she personally was against it.


Santos’ statement came the same week that leading Latin American experts met in Rio de Janeiro for the 2nd Latin American Conference on Drug Policy that I spoke at. Among the speakers were government officials from several Latin American countries, representatives from international agencies such as the Pan‐​American Organization and the UN, and experts from academia and NGOs. Even though not all speakers favored drug legalization or decriminalization, most did. The experience of Portugal on the issue (thoroughly documented in a paper by Glen Greenwald published last year by Cato) was widely cited during the conference. One panelist, a Brazilian congressman from the incumbent Workers Party, said that Brazil needed to adopt the same model as Portugal.


Attitudes on drug policy are changing in Latin America. The question remains: Is anyone in Washington paying attention?