My latest book Social Security: A Fresh Look at Reform Alternatives (available here) argues that it’s not just labor quantity — the number of employees who are accruing future Social Security benefits — that will determine the size of Social Security’s future imbalances (and, incidentally, those of Medicare, and the size of deficits for all of government), but also the quality of that labor — the value of the work those employees are doing.


Declining labor quality (as experienced baby boomers retire) will reduce taxable payrolls faster than is being projected by the Social Security Administration and the Congressional Budget Office. The result is even more beneficiaries receiving Social Security checks, and lower‐​wage workers who will be funding those checks.


In the book, I construct a detailed simulation of U.S. demographic and economic forces over the coming decades to estimate how much of a drag declining labor quality will exert on labor productivity, countering the effects of capital accumulation and technological advance.


Now James Heckman has coauthored a study suggesting that the same thing is happening in Europe, traceable in part to public policies promoting less use and low maintenance of worker skills through the early retirement incentives of their public pension, welfare, and health systems.


So it is quite clear how the developed world (Anglo‐​Saxon and mainland Europe) will spiral downward. We’ll all vote to “strengthen” social insurance systems (the U.S. health care “reform” this year being the latest example), only to further weaken incentives for the young to acquire skills, further erode the tax base, which in turn will promote the further “strengthening” of social insurance protections … and so on.


My old idea of a “covert generational war” is playing out before our very (but fully blind) eyes.


Two months ago, EU officials were even flirting with the idea of a cross‐​country crisis insurance institution — a European Monetary Fund.


One ironic element in the ongoing European crisis: Remember how the EU’s erstwhile Stability and Growth Pact included penalties on nations who exceeded the 3 percent fiscal deficit rule? Turns out, penalties must now be paid by the “successful” countries — mainly Germany and France — by coughing up the aid packages!

With multiple lawsuits challenging the constitutionality of ObamaCare's "individual mandate," the law's backers have proffered two principal arguments in its defense.  First, they claim that Congress has the power to require U.S. residents to purchase health insurance under the Constitution's grant of power "to regulate Commerce...among the several States."  Second, they claim the measure is authorized by the taxing power.

[T]he Court has never upheld a requirement that individuals who are doing nothing must engage in economic activity by entering into a contractual relationship with a private company. Such a claim of power is literally unprecedented.

Barnett also explains that the text of the law precludes ObamaCare's defenders from claiming that the individual mandate is authorized by the taxing power.  The individual mandate defines a minimum level of coverage and then imposes a penalty on people who do not purchase such coverage.  Barnett notes that the law invokes the commerce power (not the taxing power) to justify the mandate, and refers to the penalty for non-compliance as a "penalty" (not a tax):

In short, the "penalty" is explicitly justified as a penalty to enforce a regulation of economic activity and not as a tax. There is no authority for the Court to recharacterize a regulation as a tax when doing so is contrary to the express and actual regulatory purpose of Congress.

At National Review Online, Cato chairman Bob Levy explains, "even if the penalty for noncompliance is deemed to be a tax rather than a fine, it does not meet the constitutional requirements for income, excise, or direct taxes," and would be an unconstitutional tax. 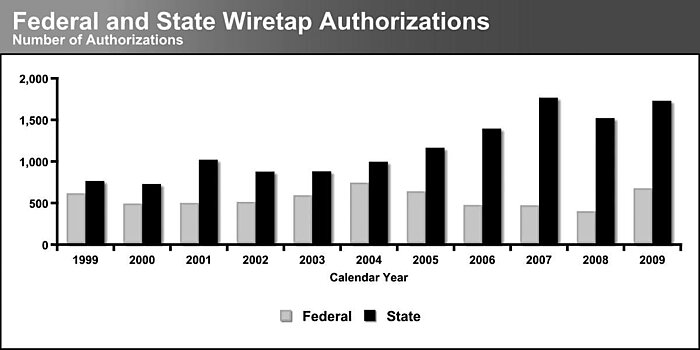 The 2009 Wiretap Report has just been released by the Administrative Office of the U.S. Courts. The headline findings: 2,376 wiretaps were authorized for criminal investigations last year, of which 663 were federal and 1,713 were issued at the state level. (NB: These numbers don’t include Foreign Intelligence Surveillance Act wiretaps, “pen register” requests for communications metadata, or orders to acquire stored e‐​mails sitting on a server.) The vast majority of wiretaps—86 percent—were part of the drug war, with the average wiretap bill running about $52,200.


In line with recent years, only about 19 percent of intercepted communications contained anything incriminating. As you can see by eyeballing the chart, the 2009 numbers reflect a sharp 70 percent increase in federal taps over the previous year, but only because 2008 was a decade low‐​point. Though the number is still relatively high, criminal federal wiretap warrants were long ago eclipsed by broader and more secretive intelligence wiretaps under FISA—of which there were 2,082 in 2008.


Since drug dealers seldom have fixed offices, it probably won’t come as any surprise that 96 percent of the orders targeted mobile devices. Since a full wiretap order also permits the acquisition of the highly detailed GPS information phones can provide, it would be nice to know how many of these orders involve the use of a cell phone as a mobile tracking device. There’s a campaign underway to update our grossly outdated surveillance laws, and better reporting on this relatively novel form of surveillance should be part of a larger geotracking reform providing a single process and a single clear standard for seeking such information, rather than the patchwork of warrants and other sorts of court orders currently employed.


As another data point for the need to reform federal surveillance law, only four of last year’s orders involved any kind of “electronic communication,” as opposed to traditional voice communications. Does that mean law enforcement agencies are just ignoring the Internet? Of course not. But current law, perversely, establishes a much higher standard for the interception of “live” communications in transit over the network than for e‐​mails that have landed on a user’s server. As soon as you open that e‐​mail, the level of protection it’s afforded by statute is radically diminished, and the constitutional protections given to stored emails are still embarrassingly unclear, at least as far as the courts are concerned.


The irony here is that the outdated federal surveillance laws actually leave us hard pressed to accurately gauge how badly they’re outdated. The primary problem is that the crazy‐​quilt of statutes and standards doesn’t map the way people actually communicate today, or line up with their real‐​world expectations of privacy in those communications. But the secondary problem is that the reporting requirements don’t line up either. I’m probably a little abnormal here, but I communicate via e‐​mail, Twitter, or IM vastly more than I talk on the telephone. I send dozens of e‐​mails on an average day (many from a GPS‐​enabled phone), but I doubt I average more than one actual voice phone call per week. There are, of course, many reasons to expect criminals to prefer the ephemeral nature of voice communication, but the disconnect still ought to be worrying. The numbers in the Wiretap Report make us feel as though we have a handle on the scope of government surveillance, when in fact we probably don’t have a very clear picture at all.

Over at Downsizing Government, we focused on the following issues this week:

Why does the Neo‐​Malthusians’ dystopian worldview — that human and environmental well‐​being will suffer with increases in population, affluence and technological change — fail the reality check? Why has human well‐​being improved in the Age of Industrialization despite order‐​of‐​magnitude increases in the consumption of materials, fossil fuel energy and chemicals?


I note that although population, affluence and technology can create some problems for humanity and the planet, they are also the agents for solving those problems. In particular, human capital and greater affluence have helped the development and adoption of new and improved technologies, which empirical data show have reduced risks faster than the new risks that may have been created — hence the continual improvement in human well‐​being in the era of modern economic growth.


A corollary to this is that projections of future impacts spanning a few decades, but that do not account for technological change as a function of time and affluence, more likely than not will overestimate impacts, perhaps by orders of magnitude. In fact, this is one reason why many estimates of the future impacts of climate change are suspect, because most do not account for changes in adaptive capacity either due to secular technological change or increases in economic development.


Finally, had the solutions that Neo‐​Malthusians espouse been put into effect a couple of centuries ago, most of us alive today would be dead and those who were not would be living poorer, shorter, and unhealthier lives, constantly subject to the vagaries of nature, surviving from harvest to harvest, spending more of our time in darkness because lighting would be a luxury, and spending more of our days in the drudgery of menial tasks because, under their skewed application of the precautionary principle (see here, here and here), fossil fuel consumption would be severely curtailed, if not banned.


Nor would the rest of nature necessarily be better off. First, lower reliance on fossil fuels would mean greater demand for fuelwood, and the forests would be denuded. Second, less fossil fuels also means less fertilizer and pesticides and, therefore, lower agricultural productivity. To compensate for lost productivity, more habitat would need to be converted to agricultural uses. But habitat conversion (including deforestation) — not climate change — is already the greatest threat to biodiversity!

If someone asked you what's wrong with a planned economy, your first answer might not be "privacy." But it should be. For proof, look no further than the financial regulation bill the Senate is debating. Its 1,400 pages contain strong prescriptions for a government-micromanaged economy---and the undoing of your financial privacy. Here's a look at some of the personal data collection this revamp of financial services regulation will produce.

The "Office of Financial Research" (sec. 152) will have a "Data Center" (sec. 154) that requires submisson of data on any financial activity that poses a threat to financial stability.

Use your noggin, now: Will government researchers know in advance what might cause financial instability? Will they home in on precisely that? No.

This is government entrée into any financial activities federal bureaucrats suspect might cause instability. It's carte blanche to examine all financial transactions---including yours. (Confidentiality rules? The better view is that privacy is lost when the government takes data from your control, but we'll come back to confidentiality.)

The Office of Financial Research is also a sop to industry. Morgan Stanley estimates that it will save the company 20 to 30 percent of its operating costs. The advocates for this bureaucracy want to replace the competitive environment for financial data with a uniform government data platform. Students of technology will instantly recognize what this data monoculture means: If the government's data and assumptions are bad, everyone's data and assumptions are bad, and all players in the financial services system fall together. The Office of Financial Research itself poses a threat to financial stability.

The "Bureau of Consumer Financial Protection" (sec. 1011) in the bill is another beetle boring into your personal financial life. Among its mandates is to "gather information . . . regarding the organization, business conduct, markets, and activities of persons operating in consumer financial services markets" (sec. 1022(c)(4)).

In case you're wondering, the definition of "person" includes "an individual" (sec. 1002(17)). The Bureau of Consumer Financial Protection can investigate your business conduct and activities.

Come now. All this private data gathering can't possibly be what they mean to do, can it?