Marginal Tax on Corporate Profits was 74.2% in the 1st Quarter

From the Bureau of Economic Analysis news release of May 29:

In other words, taxes extracted 74.2% of any added (marginal) corporate earnings, leaving only scraps for stockholder.


Companies that lost money, on the other hand, were often bailed out and/​or nationalized.


Why bother even trying to maximize profits or minimize losses?

Colleague Dan Mitchell sent me this heart‐​warming press release from the Organization for Economic Cooperation and Development, an international government organization.

The sub‐​heading is “Tax Commissioners Worldwide Join Forces To Tackle Fiscal Challenges Posed By The Financial And Economic Crisis.”


Crazy me, but I thought the way to get out of the economic crisis was for businesses and entrepreneurs to start investing and hiring again. But no, the key is apparently to launch a global drive to drain more money from the damaged private sector and fatten up the coffers of bloated governments.


The chair of the OECD’s Forum on Tax Administration, Pravin Gorhan, helpfully points out in the press release: “Tax plays a fundamental role in development through mobilising revenue, promoting growth, reducing inequalities and reinforcing governments’ legitimacy, as well as achieving a fair sharing of the costs and benefits of globalisation.”


You don’t have to be a libertarian to see what a government‐​centric view these OECD officials have. Taxes promote growth? I don’t think so. And we don’t need to hear about “reinforcing governments’ legitimacy” from an unelected government body that has been far overreaching its authority to force policy changes on the democratically elected governments of lower‐​tax nations.


If you don’t think this sort of worldwide police effort jibes with the American ideals of life, liberty, and the pursuit of happiness, you should contact your member of Congress because U.S. taxpayers pay one‐​fourth the budget of the Paris‐​based OECD.

The Price of Ignorance

We here at Cato’s Center for Educational Freedom spend a lot of time just trying to help people get their facts straight. You know, providing information that clearly shows that government schools are not the foundation of American democracy, or itemizing programs to show that school choice is not a political failure. That sort of thing.


Well, a new study in the journal Education Next demonstrates why just getting people solid information is so important: When the public has just a few basic facts about such things as public school expenditures or teacher salaries, support for heaping more dough on our sinkhole public schools takes a pretty big dip.


On spending, investigators William G. Howell and Martin R. West found that people provided with actual per‐​pupil expenditure data for their districts were significantly less likely to support increased spending, or to think that increased spending would improve student learning, than were respondents not given such data. Only 51 percent of respondents informed about actual outlays thought spending should be increased, versus 61 percent of uninformed respondents, and only 55 percent of informed respondents were confident that more spending would improve student learning (versus 60 percent of uninformed). Those levels are still way too high in light of the at‐​best very weak correlation between spending and achievement, but they do show that when people have good data to go on they tend to approach spending more rationally.


How about teacher salaries? Unfortunately, Howell and West didn’t inform respondents about teacher pay using hourly earnings, which in light of the relatively small number of hours teachers work is the fairest way to judge how well they are paid. The effect of knowing even annual salaries, however, is telling: While 69 percent of uninformed respondents supported increasing educator salaries, only 55 percent of informed people thought teacher salaries should be bolstered.


So when it comes to American education, it seems a little knowledge, far from being a dangerous thing, can be a pretty big step in the right direction. 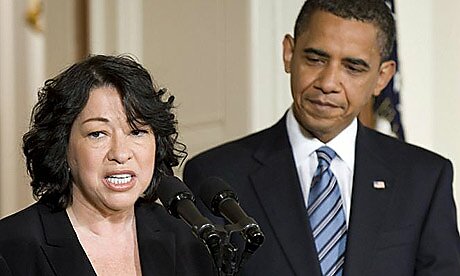 President Obama chose federal Judge Sonia Sotomayor on Tuesday as his nominee for the U.S. Supreme Court, the first Hispanic Latina to serve on the bench.


On Cato’s blog, constitutional law scholar Roger Pilon wrote, “President Obama chose the most radical of all the frequently mentioned candidates before him.”


Cato Supreme Court Review editor and senior fellow Ilya Shapiro weighed in, saying, “In picking Sonia Sotomayor, President Obama has confirmed that identity politics matter to him more than merit. While Judge Sotomayor exemplifies the American Dream, she would not have even been on the short list if she were not Hispanic.”


Shapiro expands his claim that Sotomayor was not chosen based on merit at CNN​.com:


In over 10 years on the Second Circuit, she has not issued any important decisions or made a name for herself as a legal scholar or particularly respected jurist. In picking a case to highlight during his introduction of the nominee, President Obama had to go back to her days as a trial judge and a technical ruling that ended the 1994–95 baseball strike.

Pilon led a live‐​chat on The Politico’s Web site, answering questions from readers about Sotomayor’s record and history.


And at The Wall Street Journal, Cato senior fellow John Hasnas asks whether “compassion and empathy” are really characteristics we want in a judge:

Paraphrasing Bastiat, if the difference between the bad judge and the good judge is that the bad judge focuses on the visible effects of his or her decisions while the good judge takes into account both the effects that can be seen and those that are unseen, then the compassionate, empathetic judge is very likely to be a bad judge. For this reason, let us hope that Judge Sotomayor proves to be a disappointment to her sponsor.


The Washington Post reports, “North Korea reportedly fired two more short‐​range missiles into waters off its east coast Tuesday, undeterred by the strong international condemnation that followed its detonation of a nuclear device and test‐​firing of three missiles a day earlier.”

Washington has few options. The U.S. military could flatten every building in the Democratic People’s Republic of Korea (DPRK), but even a short war would be a humanitarian catastrophe and likely would wreck Seoul, South Korea’s industrial and political heart. America’s top objective should be to avoid, not trigger, a conflict. Today’s North Korean regime seems bound to disappear eventually. Better to wait it out, if possible.

On Cato’s blog, Bandow expands on his analysis on the best way to handle North Korea:

The U.S. should not reward “Dear Leader” Kim Jong‐​Il with a plethora of statements beseeching the regime to cooperate and threatening dire consequences for its bad behavior. Rather, the Obama administration should explain, perhaps through China, that the U.S. is interested in forging a more positive relationship with [the] North, but that no improvement will be possible so long as North Korea acts provocatively. Washington should encourage South Korea and Japan to take a similar stance.


Moreover, the U.S. should step back and suggest that China, Seoul, and Tokyo take the lead in dealing with Pyongyang. North Korea’s activities more threaten its neighbors than America. Even Beijing, the North’s long‐​time ally, long ago lost patience with Kim’s belligerent behavior and might be willing to support tougher sanctions.


Here are a few highlights of Cato media appearances now up on Cato’s YouTube channel:

“We Don’t Want Venezuela to Become a Totalitarian Communist State”

“We don’t want Venezuela to become a totalitarian communist state,” declared Peruvian novelist Mario Vargas Llosa yesterday in Caracas at the opening of a major conference organized by the market-liberal think tank, CEDICE. I’m in Venezuela this week with my Cato colleagues Juan Carlos Hidalgo and Gabriela Calderon to participate in the event and to run a seminar for 60 students and young leaders from Venezuela, which took place earlier this week.

Vargas Llosa’s concern is not about some remote possibility. Nor is it the opinion of an isolated intellectual detached from reality. His comments received sustained applause from the over-flow crowd of the 600 people in attendance and he has been mobbed by the press since he arrived here yesterday. Venezuela is not yet a full fledged dictatorship, evidenced by the fact that we are meeting here with leading liberal intellectuals from the region. But the environment of intolerance, arbitrary rule, and state vilification of anybody who disagrees with Hugo Chavez’s march toward socialism has worsened at an alarming rate in recent months.

In a hagiographic profile of Obama budget director Peter Orszag, Ryan Lizza of the New Yorker writes of the “pressure” he might get from congressional deficit hawks:

The respective heads of the House and Senate Budget Committees, John Spratt, Jr., of South Carolina, and Kent Conrad, of North Dakota, have spent years trying to control the deficit…


Kent Conrad, the chairman of the Senate Budget Committee, has made eradicating the federal budget deficit his life’s work.

Now, you’d think that if the ranking Democrats on the congressional budget committees had made deficit reduction their life’s work, the budget wouldn’t have, you know, skyrocketed over the past decade and more. So let’s go to the tape.


The National Taxpayers Union has given Spratt an F for his votes on federal spending every year for more than a decade. (He had a couple of D’s earlier in his career.) In the past two years, he voted with the taxpayers 5 and 6 percent of the time. He voted for spending bills more often than the average member of the House, and more often than the average Democrat. Some deficit hawk!


Conrad has an almost identical record — almost all F’s, with ratings of 5 and 6 in the past two years.


By another measurement, in the 109th Congress (the most recent for which these calculations are available), Spratt voted for $184 billion in additional spending and voted to cut — drum roll, please — $4.8 billion in spending. Conrad voted to cut $8 billion, but he also voted to hike spending by $362 billion. In what world are these guys “trying to control the deficit”?


NTU does have one analysis that makes Conrad and Spratt look a little better: the bills they have sponsored or cosponsored. Spratt introduced 32 bills that would increase spending and 2 that would cut spending. While that may not sound very thrifty, it compares favorably to, say, Hilda Solis’s 110 bills to increase spending or Barney Frank’s 112. And the total new spending in Spratt’s bills — $7 billion — is positively Randian. Conrad’s record is similar — 36 bills to increase spending by $8 billion, which compares very favorably to, for instance, Hillary Clinton and Thad Cochran.


Apparently Conrad and Spratt don’t introduce too many spending bills, but they vote for all the ones that get to the floor. Not exactly a strategy that holds the budget down. The search for a fiscally conservative Democrat continues.

Sen. Edward Kennedy (D‐​Mass.) has begun circulating drafts of his proposed health care reform legislation. Initial reports, including an op‐​ed in the Boston Globe by Kennedy himself, suggest that the bill will contain every one of the bad ideas that I outlined in my recent Policy Analysis on what to expect from Obamacare.


Among other things, the Kennedy bill will call for:

There’s no indication yet of how much the plan would cost or how Sen. Kennedy plans to pay for it.


The bill will be formally presented to Senator Kennedy’s Committee on Health, Education, Labor & Pensions (HELP) sometime next week. Hearings could be held around June 10, and committee “mark up” could begin on June 17.


Meanwhile President Obama’s campaign apparatus is planning rallies and demonstrations around the country to build support for health care reform.


The battle over the future of health care in this country has begun.