We Washingtonians rightly get criticized for being hyper focused on politics. While D.C. natives gossip about the ups and downs of the powerful elite, most Americans are worrying about their marriages and mortgages. The disjuncture is even greater when it comes to foreign policy, an area in which public interest and knowledge are particularly limited. As many scholars have pointed out, to some degree this dynamic is the result of “rational ignorance” on the part of the public. Given the many other priorities citizens have in their private lives, the benefits of following policy debates closely is quite limited so long as people are generally confident that more knowledgeable people are paying attention.

Taken too far, however, public apathy toward foreign affairs could become a problem for a democratic system. A central pillar of democratic politics is the ability of the marketplace of ideas to foster debate and produce sound policy. Without a certain level of public engagement, the marketplace of ideas cannot function effectively. If no one is paying attention, how can we have a meaningful debate over U.S. military operations in the Middle East and Africa, or what to do about North Korea’s nuclear arsenal, or China’s growing power?

The traditional method for criticizing the public’s attentiveness to foreign policy is to note Americans’ astonishing lack of knowledge about the world. The June 2017 Pew Research “News IQ” survey finds, as usual, that most Americans know little even about events and people that have appeared regularly in the news. On the four questions most closely related to foreign policy, 60% of those surveyed knew that Britain is leaving the European Union, 47% could identify Robert Mueller as the person leading the investigation into Russian interference in the 2016 election, 44% could name Rex Tillerson as the Secretary of State, and just 37% could identify Emmanuel Macron as the president of France.

The public also typically lacks key facts informing specific foreign policy issues. Even as the Trump administration calls for new kinds of nuclear warheads, polls have routinely found that few Americans are aware that the United States already possesses thousands of nuclear weapons. And though 67% of Americans in 2014 knew that the Islamic State controlled territory in Syria, only half could identify the nation of Syria when it was highlighted on a map. In 2009, fewer than 30% knew that the United States had 70,000 troops in Afghanistan.

Thanks to Google we have another way to measure America’s foreign policy attention deficit. Google Trends gives us the ability to track how often people searched for a given term over a particular time period. If public ignorance is due to lack of interest, search activity on the Internet is a good way to measure that.

To illustrate what Google Trends data look like, Figure 1 displays people’s search interest in North Korea over the past year. The first spike reflects a series of North Korean missiles tests in April. The high point for Google searches on North Korea came in August when Kim Jong Un, after claiming North Korea now had the ability to hit the American mainland with nuclear weapons, threatened to fire missiles at Guam. President Trump responded that any North Korean provocation would be met with “fire and fury.” 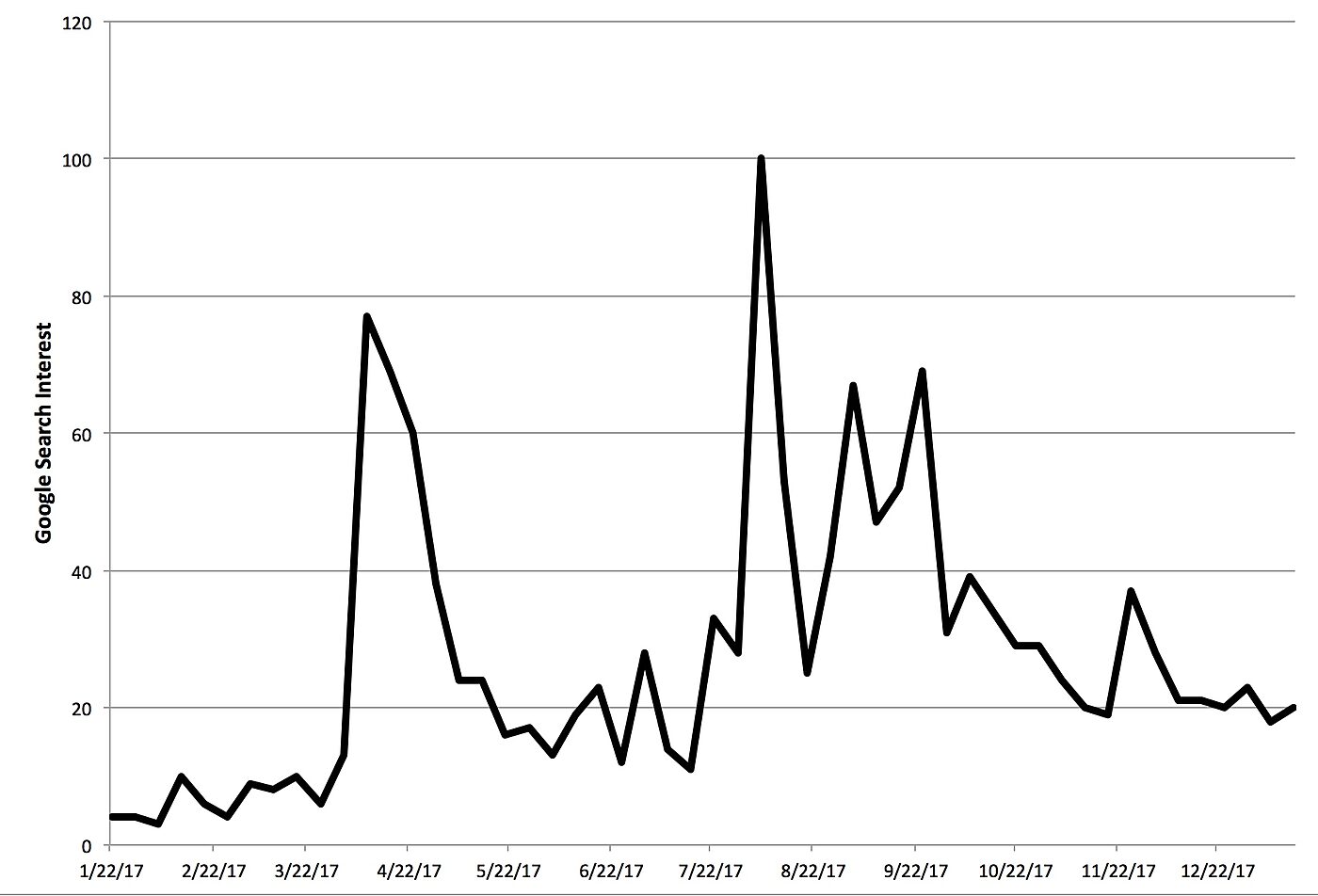 Google Trends also gives us the ability to compare the popularity of different search terms across regions. Using Google Trends, I looked at people’s search interest in eleven important foreign policy topics during 2017. The exercise confirms the political junkie stereotype of Washington, D.C. but also provides a new way to measure the lack of public attention to foreign affairs elsewhere in the United States.

Unsurprisingly, Washington D.C. ranked highest in search activity for eight of the 11 topics. The three issues Washingtonians searched for less often than their peers were refugees (2nd, behind Vermont!), North Korea (10th), and the border wall (43rd). Table 1 introduces what I’m calling the “Beltway Index,” a simple measure of how much more attention people inside the Beltway pay to foreign policy than the rest of America.

Google Trends reports results on a 0 to 100 scale, with 100 pegged to the maximum level of search interest. Washington D.C. scored 100 in eight of 11 cases. A score of 50, on the other hand, means that a search term was half as popular as the maximum. Table 1 ranks the issues by what I call their Beltway Index – calculated by taking Washington’s search interest score and dividing it by the average score for the 50 states.

According to the Beltway Index, Washingtonians exhibit twice as much interest in foreign policy, on average, as Americans living outside the Beltway. The variations are illuminating. The highest index score is for the North American Free Trade Agreement. Despite NAFTA’s importance, and Trump’s promises to renegotiate a deal he has roundly criticized, trade policy makes for dull fodder. Trade negotiations unfurl slowly, behind closed doors without any compelling visuals, and the arcane details involved hold little interest for most Americans. On the other end of the spectrum, the only issue less popular in Washington than in the average state was Trump’s favorite construction project, the border wall. The three states most interested in the wall include Illinois (100) along with California (81) and Texas (77). Curiously, both Arizona (47) and New Mexico (41) are among the less interested states on the issue.

Table 1. Attention to Foreign Policy and the Beltway Index

Given the relatively low comparative level of interest in foreign policy shown by Americans outside of Washington D.C., we should not be shocked that public knowledge on these issues is so low. But given the low level of confidence in the government these days, and the high number of Americans who believe the nation is on the wrong track, it is surprising that so few people outside Washington D.C. feel the need to monitor events more closely. Leaving politics to the professionals only makes sense if citizens feel they can trust their political leaders. If there were ever a time when citizens might be expected to be paying more attention 2017 would seem like an excellent time do so.

Combining the Google Trends data with the 2016 popular vote for each state we can, in fact, find evidence of the connection between trust and attention. The 24 states that voted for Trump had an average search interest score of 45.8 while the 26 states (and Washington D.C.) that did not averaged 54.3 (or 52.9 excluding Washington, D.C.). This result is in line with the idea that people who trust Trump feel more comfortable paying less attention to foreign policy, while those who trust Trump less feel compelled to pay more attention. Table 2 provides data for the states with the strongest and weakest support for Trump. The ten states with the highest popular vote percentages for Trump averaged 44.3, while Washington D.C. and the nine other states with the lowest vote percentage for Trump averaged 60 (or 57 excluding Washington D.C.).

By most accounts Trump’s first year as president has been unusually turbulent. Every day holds the promise of another destabilizing tweet, a juicy revelation in the Russia interference investigation, or news about critical developments abroad. True, a lot of the day’s news turns out to be white noise – compelling for D.C. insiders but of little value most Americans. But on the other hand, when the president increases U.S. military presence in the Middle East by 33%, cranks up airstrikes in Afghanistan, announces that the U.S. will keep 2,000 troops in Syria indefinitely, and trades insults with North Korea on a weekly basis, paying more attention to the news starts to sound like a pretty good idea.