House Democrats’ proposed $1.9 trillion stimulus bill includes a weekly pandemic unemployment benefit supplement of $400 per week through August 29. The generosity and duration of that uplift is a mistake—it will restrain an employment recovery through 2021 by disincentivizing returns to work.

Democrats cite recent studies which suggest that the $600 supplement introduced at the height of lockdowns in 2020 did not much harm job findings. The level of benefits then was truly massive: the median unemployed recipient obtained 145 percent of their previous wage income from unemployment insurance, with a full 76 percent of those eligible making more unemployed than in their previous job. So, they say, if that benefit didn’t appear to have a big effect on job take-up, why not a $400 supplement through August this year?

But as I write in my forthcoming book, Economics In One Virus, good economists both “think on the margin” and about the context in which policies are implemented. That temporary $600 per week supplements did not appear to greatly impact job take-up when workers were being recalled by existing employers, the economy was deeply depressed, and a great deal of uncertainty existed over the future of the benefits, does not mean $400 per week supplements will do no harm today, when a greater share of the jobless are long-term unemployed and vaccines offer promise of a rapid economic reopening through spring.

A new paper by University of Chicago-JP Morgan Chase economists, for example, suggests that the $600 unemployment benefit last year did reduce employment levels, albeit by a small 0.2 to 0.4 percent. They outline two factors that suppressed this from being a much larger effect: 1) an unusually high proportion of unemployed workers at that time were recalled to their former employers due to the on-off nature of the first lockdown—by law, these people had to accept such recalls or risk losing benefits 2) the pandemic elevated the cost of searching for a job through the period, which likely kept the exit rate from unemployment at a sustained low level through the whole of 2020.

Both conditions are unlikely to apply in the coming months. As vaccinations facilitate a re-normalization of much economic life, job search will become easier and the workers seeking new jobs will be those not already recalled to old employers. Indeed, the long-term unemployed share of total unemployment is increasing. The job disincentive effects from extending high levels of unemployment benefits will therefore grow larger with their duration, undermining the jobs recovery in spring and summer. In fact, this could be unusually damaging in this rebound, because, as the Washington Post reports today, the pandemic has resulted in very new patterns of work and consumption which are likely to stick, making a host of “old jobs” non-viable.

True, many would-be workers will “look through” the benefits and take any job offer on the basis of their longer-term prospects. Many will have to weigh up the permanent benefits of employment against the temporary uplift in benefits for a few months. But AEI’s Michael Strain estimates 62 percent of workers would still receive more from unemployment compensation than from their previous work, with a quarter of workers seeing weekly benefits 40 percent larger than their former weekly wages. These levels are much higher than necessary to aid former workers in smoothing their consumption and so, inevitably, we will see a subset of would-be workers who will delay entering new jobs.

In fact, even the Chicago-JPM study showed that the level of benefits mattered for determining exit rates from unemployment for workers who were not recalled to their old employer. The exit rate from unemployment rose just as the value of the benefits fell from $600 to $300 per week in August, plateauing then at a higher exit rate through October. This effect was larger in states where the $600 benefits were highest relative to wages. These effects would be bigger still in a world where job search is less costly. 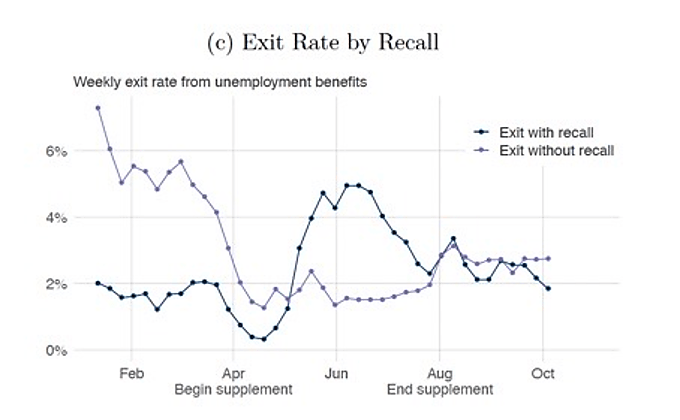 As the economy returns to a degree of normalcy then, we should pay heed to the academic literature of 1950-2019 and not just the unusual circumstances of 2020. This literature clearly shows that more generous unemployment benefits and, especially, a longer duration for them, raise the unemployment rate.

2020 was an anomaly. In those early months of the pandemic, people staying home rather than working was seen by many as a feature of the unemployment insurance policy, not a bug. A lot of businesses still reported finding it difficult to find labor at affordable wage rates, of course. But now, as the emergency stage of the pandemic ends, so should emergency policy. At the very least, high UI benefit supplements should be phased out over the coming months, allowing the economy to adjust to new supply and demand realities. We do not want to get stuck in a doom-loop of generous benefits keeping unemployment high and so leading to the demand to maintain benefits for longer.

Much more on pandemic unemployment insurance, the financial incentives it created, and the trade-offs of it brought about can be found in my forthcoming book: Economics In One Virus (available for pre-order).