Last year, the annual average temperature in the contiguous United States was the highest on record (since 1895) according the data compiled by the National Climatic Data Center (NCDC). This year, the temperature took a nosedive from the lofty heights of 2012.


As we pointed out in our coverage of the 2012 milestone, the influence of human‐​caused climate change on the U.S. temperature history (including last year’s record warmth), while undoubtedly present, is difficult to ascertain.

The role that anthropogenic “global warming” from the emissions of greenhouse gases from the combustion of fossil fuels plays is debatable—both in timing and magnitude. Almost certainly its influence is present and detectable in the U.S. annual average temperature record, but beyond that simple statement, not a whole lot more can be added with scientific certainty.

We now stand nearly a year later with more evidence of proof and point.


Through November of this year, the U.S. average temperature is only 0.53°F above the 20th century mean temperature (the default baseline used by NCDC). Last year the annual temperature was 3.24°F above it. 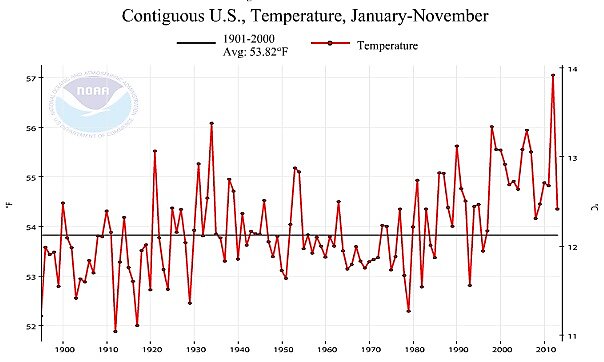 Figure 1. Average January‐​November temperature in the contiguous United States from 1895–2013 as compiled by the National Climatic Data Center (source: NCDC, Climate at a Glance).


With the cold start to December across the country, the annual temperature for 2013 has an increasingly good shot at coming in below the 20th century average. For this to happen, the U.S. temperature for December would have to average about 27.6°F. For the first 12 days of the month, the average has been 28.4°F, and the forecast is for continued cold, so getting to the needed temperature is not out of the question.


If 2013 does come in below the 20th century average, it would be the first year since 1996 to have done so, and would end a 16‐​year long run of above average annual temperature for the U.S. You can follow the chase here.


But even if the rest of the month is not quite cold enough to push the entire year into negative territory, the 2013 annual temperate will still be markedly colder than last year’s record high, and will be the largest year‐​over‐​year decrease in the annual temperature on record, underscoring the “outlier” nature of the 2012 temperatures.


In either case, 2013 shows that the natural variability of annual temperatures in the U.S. is high (as is decadal and multi‐​decadal variability, see Figure 1)—an important caveat to keep in mind when you face the inundation of every‐​weather‐​event‐​is‐​caused‐​by‐​human‐​global‐​warming hysteria.


The Center for the Study of Science would like to thank Ryan Maue of WeatherBELL Analytics for his summary of December temperatures and the expected temperatures for the rest of the year.