The Rich in Public Opinion

What do people in the United States and Europe think about the rich? There are several thousand books and articles on stereotypes and prejudices directed at women, people of various races or nationalities, and even the poor. In contrast, there has only been sporadic research into stereotypes about the rich and no published comprehensive, scientific study on the topic—until now. 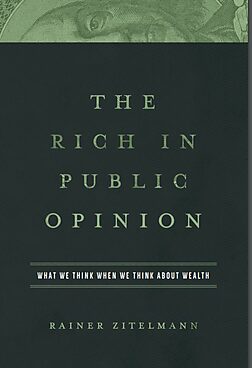 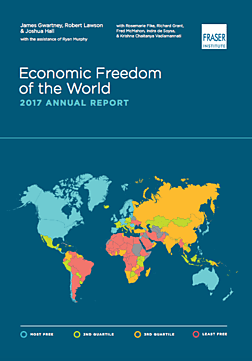 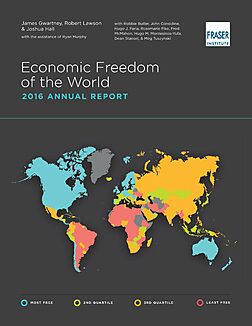 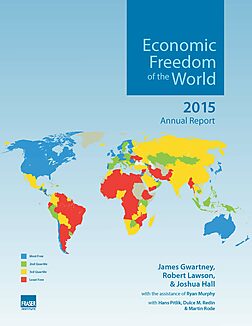 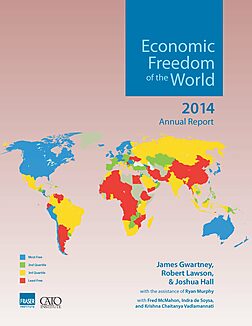 Economic Freedom of the States of India: 2013

The Economic Freedom of the States of India 2013 report shows how the states have become freer over time and how Gujarat has widened its lead on the index. The report also includes a chapter on how Bihar, India’s poorest state, took advantage of improved national policies to achieve double‐​digit growth. Another chapter documents how centralization at the national level violates the Constitution and constrains the economic freedom of the states. 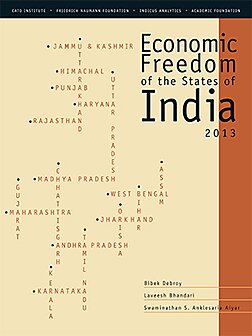 Economic Freedom of the States of India: 2012

The first Economic Freedom of the World Report, published in 1996, was the result of a decade of research by a team that included several Nobel Laureates and over 60 other leading scholars in a broad range of fields, including economics, political science, law and philosophy. This is the 16th edition of Economic Freedom of the World and this year’s publication ranks 144 nations for 2010, the most recent year for which data are available.

Worldwide economic freedom has bounced back slightly since falling during the global recession, according to the 2012 Economic Freedom of the World Report. After falling for two consecutive years following a long trend of increases, the average score rose from 6.79 in 2009 to 6.83 in 2010, the most recent year for which data is available. In this year’s index, Hong Kong retains the highest rating for economic freedom with Singapore, New Zealand, Switzerland, Australia, Canada, Bahrain, Mauritius, Finland, and Chile, taking top spots on the list. Bahrain and Finland are new to the top 10 — replacing, notably, the United Kingdom (fell to 12th) and the United States (a sizable drop to 18th).

The U.S., long considered the standard bearer for economic freedom among large industrial nations, has experienced a substantial decline in economic freedom during the past decade. From 1980 to 2000, the U.S. was generally rated the third freest economy in the world, ranking behind only Hong Kong and Singapore. After increasing steadily during the period from 1980 to 2000, the chain‐​linked EFW rating of the U.S. fell from 8.65 in 2000 to 8.21 in 2005 and 7.70 in 2010. The chain‐​linked ranking of the U.S. has fallen precipitously from second in 2000 to eighth in 2005 and 19th in 2010 (unadjusted ranking of 18th).

Economic Freedom of the States of India: 2011 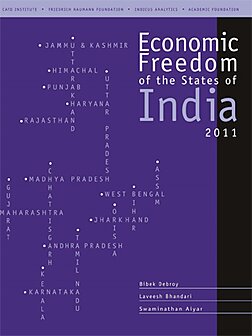 By James D. Gwartney and Robert A. Lawson
September 2008

Economic Freedom of the World measures the degree to which the policies and institutions of countries are supportive of economic freedom. The cornerstones of economic freedom are personal choice, voluntary exchange, freedom to compete, and security of privately owned property. A global effort has been devoted to reducing world poverty. Some claim poverty can be best combated by foreign aid. Others point to the importance of domestic policies, such as those that support or weaken economic freedom. In new research published in this year’s report, Seth Norton and James Gwartney investigate the connection between economic freedom and poverty. Using various measures of poverty, Norton and Gwartney find a strong positive relationship between economic freedom and poverty reduction and call for more research in this area. This year’s report notes that economic freedom remains on the rise. The average economic freedom score rose from 5.46 (out of 10) in 1980 to 6.65 in the most recent year for which data are available. Of the 102 nations with chain‐​linked scores going back to 1980, 89 saw an improved score and 13 saw a decrease. In this year’s index, Hong Kong retains the highest rating for economic freedom, 8.94 out of 10, followed by Singapore, New Zealand, Switzerland, United Kingdom, Chile, Canada, United States, Australia, and Ireland. The first Economic Freedom of the World report, published in 1996, was the result of a decade of research by a team which included several Nobel Laureates and over 60 other leading scholars in a broad range of fields, from economics to political science, and from law to philosophy. This is the 12th edition of Economic Freedom of the World. This year’s publication ranks 141 nations for 2006, the most recent year for which data are available.
By James D. Gwartney, Robert A. Lawson, and Seth W. Norton 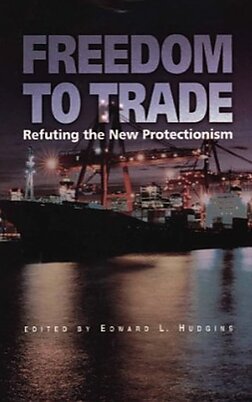 Political scientist David Osterfeld challenges the prevalent interventionist model of economic development and proposes capitalism as an alternative. Osterfeld argues on both theoretical and empirical grounds that the most effective way to promote growth is to establish a wall of separation between government and the economy.

Building on the work of Peter Bauer and Julian Simon, Osterfeld emphasizes the importance of the market as a vehicle for growth. He extends the concept of privatization to the Third World while showing that population growth is no barrier to prosperity and a healthy environment; agricultural land and food supplies are not being exhausted; and natural resources are becoming more abundant.

This is the ideal handbook on Third World development, focusing on such critical issues as foreign aid, the role of multinational corporations and foreign investment, migration, the impact of political corruption, and a host of other issues. Osterfeld’s book is an important contribution to the continuing debate over poverty and population in the developing world. Published by Oxford University Press. 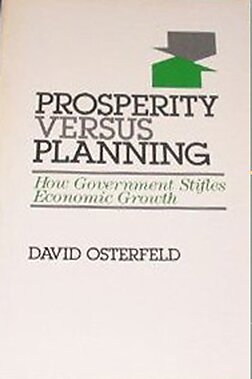