Privatizing Superfund: How to Clean Up Hazardous Waste

Is It Time to Privatize the Postal Service?

Whose Pension Is It Anyway? Economically Targeted Investments and the Pension Funds

Beyond the Grazing Fee: An Agenda for Rangeland Reform

The State of Humanity

Despite the impression left by the news media and the environmental lobby, the world is becoming more — not less — hospitable to human life. That’s the message of this important book, edited by the late resource economist Julian L. Simon and published by the Cato Institute and Blackwell Publishers.

The State of Humanity updates and vastly expands 1984’s The Resourceful Earth, edited by Simon and the late Herman Kahn. That book was intended to refute the influential 1980 Global Report to the President, which warned that “the world in 2000 will be more crowded, more polluted, less stable ecologically, and more vulnerable to disruption than the world we live in now.”

In The Resourceful Earth, economists and scientists argued that the trends of the material conditions of the human race were all positive. As Simon writes in his introduction to The State of Humanity, “The years have been kind to our [1984] forecasts — or more importantly, the years have been good for humanity.”

The State of Humanity assembles the work of an impressive array of experts not only in fields related to material resources but also in such areas as life expectancy, childhood mortality, health and disease, murder and suicide, and leisure time.

“Every forecast of the doomsayers has turned out to be wholly wrong,” Simon writes in his introduction. “There is no convincing economic reason why these trends toward a better life should not continue indefinitely.” 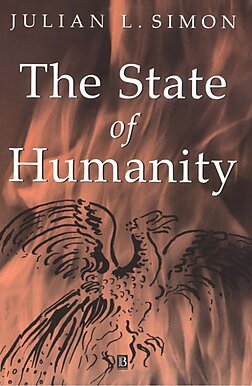 Highway Aggravation: The Case for Privatizing the Highways